This is the first game review from this blog, and it’s for Sonic Colors on the Nintendo Wii.

First of all, the rating system for these game reviews will go like this: There will be a score for the game’s sound, presentation, gameplay, multiplayer and length. Then at the end, there will be a final average score.

Now, onto the review! Sonic Colors is a 2D-3D platformer action-adventure game, in which Sonic and Tails attempt to foil yet another one of Dr. Eggman’s evil schemes, this time involving enslaving a race of aliens known as “Wisps”. Now, I must say that the plot for this game is pretty good, considering all the different game mechanics that have to be included in the story. 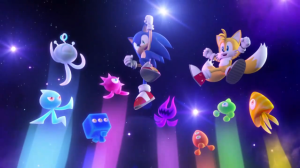 Sound: The music for this game is fantastic, ranging from orchestrated final boss themes to catchy amusement park type tunes, and the new voice acting for Sonic and the gang is great. Sound: 9.5/10

Presentation: The game’s menu system is easily navigable, and definitely colorful. The actual visuals for the in-game action itself are outstanding for Wii standards, looking phenomenal in 3D and in 2D. Presentation: 10/10

Gameplay: This is one of Sonic’s better 3D games, at least for gameplay. The 3D sections are fast, engaging and fun, and the 2D platforming sections are very well done as well. I have a few minor gripes though, like when you control the laser wisp on some 2D stages it’s controls can be slippery, and so can the jumping mechanic when aiming for a very small platform. Also, there are a handful of minor glitches throughout the game. Gameplay: 8/10 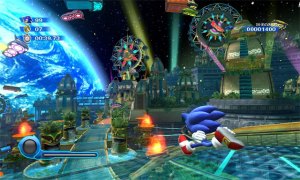 Multiplayer: Definitely a blast, but only if both players are good at the game. See, if one player gets too far ahead of the other than the other person dies. Now, that’s a major problem in a Sonic game where the objective is to run as fast as possible. But overall multiplayer can still provide some good moments, if played correctly. Multiplayer: 7/10 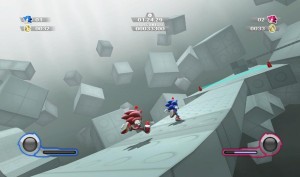 Length: This is one of the shorter Sonic games out there. Actually, this is one of the shorter Wii games overall. For me, it lasted about 6 hours, just getting through the story mode. Now, if you go back to collect all the red rings in the game, it’ll add on an hour or two to the gameplay time, but in general it’s a pretty short game. Length: 7/10

And now it’s time to determine the final score: 8.3 out of 10! This game is a great addition to anyone’s Wii game collection.