This will be another two-in-one review, with each console version of the game getting its own section per reviewing topic.

Sonic and Sega All-Stars Racing  is pretty much a huge compilation of Sega characters from years past, and of course quite a few from the Sonic the Hedgehog series. No story whatsoever, it’s just one big race to the finish line. 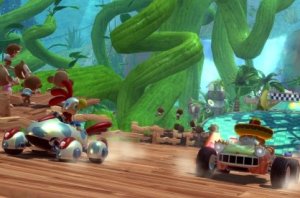 Sound: Both versions of the game have a great soundtrack from all the various Sega universes, changing depending which course you’re on.
Xbox 360/Wii: 9/10

Presentation: The menu system is identical on both versions, and it works very well. Easily navigable and user-friendly. Now, the in-game graphics are slightly better on the Xbox 360, but that was inevitable. The Wii version’s graphics are really impressive, none the less.
Xbox 360: 9/10
Wii:8.5/10

Gameplay: This game has some extremely fun gameplay mechanics, such as drifting, boosting and of course All-Star mode, where your character gets to use a super-power specific to themselves. The gameplay is identical on both the Wii and Xbox 360, with both being equally fun.
Xbox 360/Wii: 9/10

Multiplayer: This game’s multiplayer is great. Racing someone next to you on the couch is a blast, and facing people via the internet is just as fun. I noticed that the Wii version seemed to have a lot more online activity than the Xbox version, though.
Xbox 360: 8.5/10
Wii: 9/10

Length: It all depends on how much you can get into the game’s multiplayer, Grand Prix and mission modes. As long as you enjoy those, you have countless hours of fun game time ahead. Personally, I got about 20 hours worth of enjoyment out of the game. Also, with exclusive characters Banjo and Kazooie and the Metal Sonic/Death Egg DLC for Xbox 360, there’s even more fun to be had.
Xbox 360: 10/10
Wii: 9/10