The first Sonic game to trade in speed for RPG mechanics. But even without the insanely fast loop-de-loops, does this game still stack up to be a quality entry in the Sonic series? Read on to find out!

Presentation: Okay graphics, but nothing too special. A fair amount of different locales to play in, though. Presentation: 7/10

Sound: This game has some really peculiar music, but overall the soundtrack is pretty good. Sound: 7.5/10

Gameplay: The gameplay is classic, RPG styled gameplay, with the occasional stylus command and irritating puzzle thrown in. Sonic and each of his teammates all have their special attacks, but overall the game just doesn’t deliver the fun factor most other Sonic games have. The character variety is nice, though. Gameplay: 7.5/10 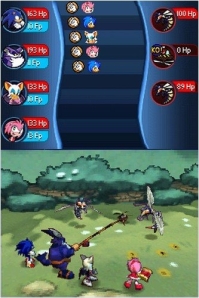 Length: The game has a short story mode, and once that’s over the game just repeats the story over and over and over again. For me, the game lasted only about 6 hours. Overall, I’m pretty disappointed with the lack of replay value. Length: 4/10

The average score for this game is a 5.2/10, with a title of weak. This game provides a handful of fun moments, but overall it’s just a big mess of pathetic battle sequences, maddening puzzles, and extremely easy bosses. Sega and BioWare need to make some serious improvements to this game if they ever intend on making a sequel.