This’ll be a review of Transformers: WFC, which is one of the best games I’ve ever played. Why, you ask? Read on to find out!

Story: Megatron and his Decepticons are making their move to take over all of Cybertron using a power called “Dark Energon”, and it’s up to Optimus Prime and the Autobots to save their home world before Megatron achieves total control of the planet.

Presentation: A visually varied, graphically gorgeous game that has the Transformers looking their best. Whether they’re fighting through a high-security prison or battling at the core of Cybertron itself, there are plenty of visually stunning moments to be had. Presentation: 9.5/10

Sound: The voice acting for the Transformers is outstanding. The music is composed mainly of heavy metal tracks, making every moment of the in-game action feel intense. Sound: 10/10

Gameplay: Fantastic gameplay throughout. The controls are solid, and the core game mechanics are loads of fun. The game makes full use of the ability to transform, so that it doesn’t feel like a gimmick, but like a necessary ability. Whether it be soaring through the skies as Skywarp or blasting Decepticons on foot with Optimus Prime, there’s loads of fun to be had. The only minor downsides are that you don’t get that much ammo in-game so you have to use every weapon sparingly, and if you’re playing solo the AI teammates aren’t always the brightest. Gameplay: 9.5/10

Multiplayer: Just as much action as in the campaigns and escalation, only with more people. With a lot of different multiplayer modes to choose from and the ability to make your own transformer, the variety is great. My only gripe is that it takes a very long time to level up. Multiplayer: 9/10 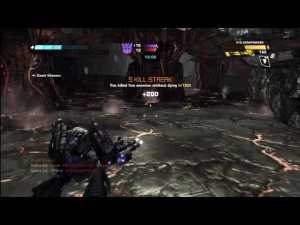 Length: The campaigns last about eight hours together, with escalation mode and multiplayer adding on a few extra hours. Length: 8/10

Overall: This game gets an average of 9.2/10. This is one of the more difficult games that I’ve played, but the challenge only made it more fun. Not being a Transformers fan when I started playing, I was prepared to be a tough critic. But this game has impressed me in a way most games can’t, and I recommend it to any gamer.