With the mind bending sequel being released recently, I thought it’d be fitting for me to do a review of the first. Now, onwards with the review! 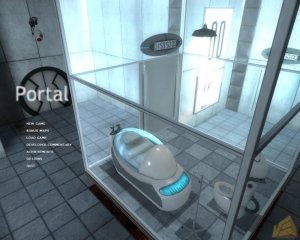 Sound: Nothing musically amazing, in comparison to the majority of games out there. But what the game lacks in a soundtrack, it makes up for in hilarious commentary from GLaDOS. Whether she’s giving you an empty complement or outright insulting you, it’s always a blast to hear what she has to say. Sound: 8.5/10

Presentation: Not a bad-looking game, but not a digital masterpiece either. Although I have to admit traversing through portals is pretty mind-bending, visually. Presentation: 8/10

Gameplay: Amazing gameplay throughout the entirety of Portal. Whether it be jumping off of a huge ledge to rocket into a portal with loads of momentum, or timing a jump onto a moving platform to avoid acid water, there’s loads of fun to be had. The game delivers extreme variety as to what the portal gun can do. Gameplay: 10/10 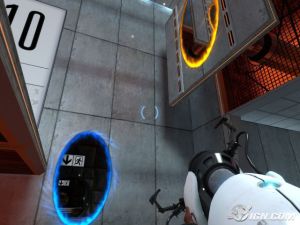 Length: Although it’s a short game, it’s a very entertaining one for the time it lasts. I got through the majority of it in about four and a half hours, with only a handful of truly difficult puzzles lengthening the game time for me. Length: 7/10

Overall: This game gets an 8.3/10! If you want a unique puzzle solving game, then Portal is for you.