Prince of Persia: The Forgotten Sands. So many different opinions on the game, and now I’m here to cast mine. Should the Forgotten Sands stay forgotten, or should you shell out your hard-earned money to play this platformer? Read on to find out!

Presentation: Truthfully, I don’t think the graphics are very cutting-edge, in comparison to some of the other games on the market for Xbox 360. They’re okay, but character models look stiff and awkward throughout the game. Presentation: 6.5/10 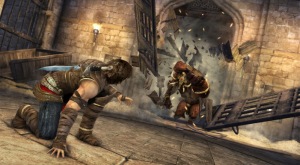 Gameplay: Between the amazing platforming sections, epic combat sequences and occasionally difficult puzzles, this game mixes it up and keeps things interesting. On top of just swinging on poles and climbing walls, the game grants you the powers to rewind time if you mess up a jump, fly a short distance when enemies are near, freeze water so you can use it as a platform, and restore missing chunks of ruins that are missing in your path. These interesting game mechanics mixed in with the zombie-slashing battle sequences where you unleash different elements to your advantage (stone armor, flame trail, etc.) add up to a really fun gameplay experience. Even the bosses which consist mainly of slashing at the heels of the enemy are fun, to some extent. My only real gripe with the gameplay is that near the end of the game, restoring missing ruins becomes very irritating because the game requires to you restore them at odd and unreasonable moments in the platforming, like when you’re half-way through a wall run. Gameplay: 10/10 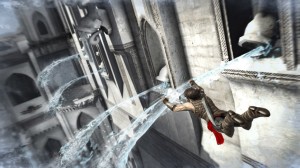 Length: To complete the story mode, about eight hours. To beat the two bonus modes, about four minutes a piece. Still, the game manages to provide a fairly long and enjoyable experience. Length: 8/10

Overall: The Forgotten Sands gets a whopping 8.3/10! A fun game that represents the Prince of Persia franchise well.