With the highly anticipated movie “Transformers: Dark of the Moon” coming out soon, we all saw this video game coming a mile away. But is it good enough to get you even more hyped for the movie, or does this game fall flat? Read on to find out!

Story: Earth’s leaders believe Megatron and the evil Decepticons have finally left, but Optimus Prime knows better. The Autobots are armed and ready to defend earth in a fight unlike any other against a dangerous new foe, Shockwave.

Presentation: High Moon Studios (the developers) did a surprisingly good job at capturing the Transformers’ size on an earth scale and accurately designing the characters to look like their movie counter-parts. My only minor complaint is that this game is seriously dark (no title pun intended), which makes certain areas hard to navigate through. Presentation: 9.5/10

Sound: The music is good, with heavy-rock metal soundtracks dominating a fair portion of the game. Also, the voice acting is phenomenal with every character sounding just like they do in the movie.  Sound: 9/10

Gameplay: Dark of the Moon takes quite a few pages from it’s predecessor, Transformers: War for Cybertron. The gameplay is almost identical, with only a few minor differences. The first new change is a feature called “stealth mode” which has nothing to do with stealth at all, and it’s function is to boost your gunfire output while in vehicle form but ends up being completely useless in the heat of battle. Next, the new steering mechanics for your car transformation have been redesigned so that vehicle mode is now a pain to use because of quirky and awkward controls. Last, the lack of teammates. The whole Transformers series is about teamwork, so why does this game force you to venture solo for so much of the story? But other than those three items, the game gets it right and makes bashing massive robots to pieces with a large plethora of weapons a fun experience that never gets tiresome. One thing I found especially crafty is how the developers really took advantage of the “Transformers in disguise” theme and hid enemies amongst waves of identical automobiles. Gameplay: 7.5/10 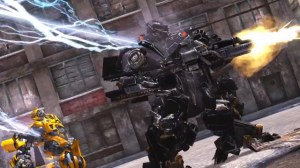 Multiplayer: Very similar to Transformers: WFC with only a few modifications. There aren’t many upgrades, weapons or characters to choose from in multiplayer mode which numbs down the variety a bit, but upgrading your character isn’t terribly long and tedious to do which balances things out well and makes for an extremely fun multiplayer experience. Multiplayer: 10/10

Length: The campaign doesn’t last that long, ending at about the six or seven hour mark. Multiplayer does add on a few more hours of fun, but in general Dark of the Moon is just a short and sweet adventure. Length: 7.5/10

Overall: This game gets an 8.7/10! An amazing movie title tie-in that gives any gamer their daily dose of colossul robot battles. Transformers, roll out!