This tip guide will help out with the final Catwoman mission/achievement. 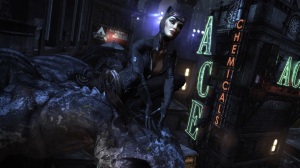 Final Catwoman Mission/Achievement Tip: The final achievement is called “Family Jewels”, but you don’t receive it after beating Two-Face. After the fight with Two-Face, switch back to playing as Catwoman (because after the fight you automatically revert to Batman) and your goal will be to venture around the city beating up thugs who have your stolen goods (a somewhat secret objective of which the game doesn’t tell you post-fight). The easiest way to do this is using Catwoman’s detective mode. There will be a total of sixteen thugs with pieces of your stuff, but loads more will be there to give them backup. So carefully traverse rooftops, pummeling snipers and gunners then go down to the ground and use silent takedowns, so as not to alert more thugs than necessary. Following those steps, you should be good to go! The “Family Jewels” achievement and fourty gamerpoints are yours!