Does “Ultimate” MvC3 improve upon the original? Does Captain America fly?… No. So why is this game still a cheap series cash-in by Capcom? Read on to find out! 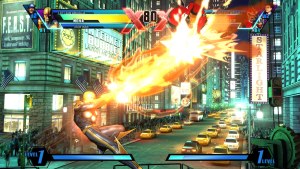 Story: A giant gang-bang of Marvel and Capcom characters intent on bashing each other to oblivion. ‘Nuff said.

Sound: Capcom makes a decent set of background tunes for this game, but nothing really interesting/memorable. Sound: 4.5/10

Presentation: The slick and stylish visuals from MvC3 are back and looking as impressive as ever. Everything has an appropriate video game-y and comic book-esque vibe to it, fitting for the game’s source material. Also, extremely little lag on or offline! Yay! Presentation: 9.5/10

Gameplay: This is where the “Ultimate” part of the game’s title is SUPPOSED to come in. But it doesn’t. Yes, amongst the cluster of new characters introduced there are a few fun ones, but in all honesty almost none were asked for and absolutely none of them are top-tier fighters! The new stages are okay at best, and half of them are just black and white rehashes of previous stages, so you can easily tell the design team went out on coffee break while this was being developed. New modes are scarce, with the only major improvement being… drum roll please… spectator mode for online. Whoop-de-freakin’ doo. Watching other people fight is the only new mode Capcom could muster up. Now, what is my reaction to this?… It’s WHAT THE %&$# IS THIS HORSE$%!& THAT CAPCOM THINKS THEY COULD $%#^ US OVER WITH?!?! Like seriously, fourty mothertruckin’ dollars down the drain all because of those money-hungry bastards who are desperate to make a cheap buck off of dedicated tournament fighters or poor reviewers like myself. Gameplay: -2/10 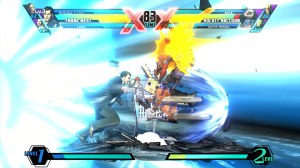 Multiplayer: Well, multiplayer’s grade goes up thanks to the Godly SPECTATOR MODE THAT WAS SOOOOO FREAKIN’ IMPORTANT, apparently. But yes, multiplayer is a bit more fun because now instead of seeing two gamercards banging each other we actually get to watch the match. Fun. The online gameplay itself is fun too, with little lag whatsoever. Multiplayer: 7/10

Length: Considering it only offers about a whopping one and a half hours worth of new content, this digital disaster is a disgrace that improves upon almost nothing important, making it feel worth the price tag only in the most specific of areas. Length: 1/10

Overall: Well, congrats Capcom. You get the honor of scoring the first negative ever in one of my reviewing categories, and you get my very first EPIC FAIL seal of disapproval. But because of the way I rate games, this cash-in gets a not deserved whatsoever 5.6 out of 10.