Sonic CD. The one Sonic game no one has ever played. Some called it an overglorified Sega CD game, some called it the best Sonic title to ever be released. Which one will it be? Read on to find out! 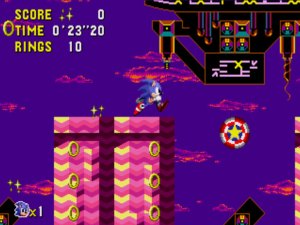 Sound: Classic Sonic games knew how to make music, that’s for sure. Epic soundtrack, especially the song in the intro with what I think is the first to have vocals in the series! Of course, the 8-bit (or 16-bit, I don’t know) music is some of the best in Sonic history. And to top it off, this version comes with both the USA and Japanese soundtracks! Sound: 9.5/10

Presentation: It’s pretty much the perfection of the Sonic 1 graphics. It looks great, although I prefer Sonic 2 and 3’s graphical style. Special stages, on the other hand, have aged pretty badly and look sort of tacky as just sprites in comparison to modern day visuals. Presentation: 7/10 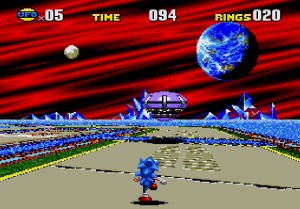 Gameplay: Thought you knew the classic Sonics? Well, think again! This game feels practically nothing like it’s brethren, being a bouncy cluster of springs, obstacles and countless enemies, all placed in levels that are packed to the top with platforms. Because of these numberous obstructions, the game focuses more on precision platforming than speed, which is quite a change of pace from other Sonic games. The platforming is fun, but with Sonic’s new figure 8 move, it’s a bit of a shame we couldn’t see more of it due to the inability to ever build up enough speed. Aside from that, there’s also the ability to time travel, which gives the game infinite replayability. The future stages are the easiest to blaze through, the present have the most standard feel to them, and the past are the ones where you can destroy generators and fix the future, thus giving the game a good ending (and yes there are multiple endings). I have to talk about the annoying special stages, though. These things make me want to yell at puppies. They are the most aggravating special stages I’ve ever encountered in a Sonic game, due to the fact that all of the obstacles are so flat and graphically outdated that you can’t even tell what they are until they’ve hit you. The dumb little UFO’s you have to hit are extremely mobile and all in all it’s just a ridiculous goose chase trying to get the Time Stones these stages unlock (Getting all of the Time Stones through special stages is another way to reach the good ending). Lastly, once you beat the game you unlock Tails as a playable character, a cool new addition in this port. Only problem is that you have no incentive to play as him because he can’t unlock achievements. Gameplay: 7.5/10

Length: If you rocket through the game, totally ignoring time travel and special stages, you can probably rap the adventure up in under an hour. But if you dedicate enough effort to finding all of the generators in the past and getting all of the Time Stones, this game can last countless hours of intricate exploration and platforming. For the standard gamer though, the latter will be disregarded and the game will be over in under sixty minutes. Length: 7.5/10 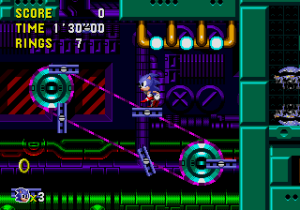 Overall: Sonic CD gets a well deserved 7.9/10! Although it’s not standard speedy Sonic action, and is based more around careful exploration and the time travel gimmick, I say go out and get it if you’re even mildly interested. It’s only 400 microsoft points, to boot!