After the amazing adventure that was Deus Ex, is the downloadable content that continues the adventure for a price of $15 worth it? Read on to find out! 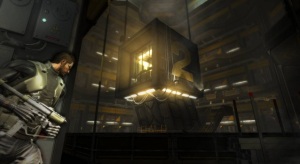 Story: “The Missing Link” fills in the events of what happens to Adam after he boards the Belltower ship in a stasis pod and before he arrives in Singapore. It fills in all of the gaps of what happened and ties up enough loose ends well enough that I forgive it for the few ends it unties.

Sound: It’s the epic and eerie techno Deus Ex soundtrack, what do you expect me to put here? Soundtrack: 9/10

Presentation: There are only two locations in this DLC, which means environments aren’t going to be extremely varied. But there are enough wicked cool set pieces to make every revisit feel just as cool the second time around… or third or fourth. Graphics themselves are still superb. Presentation: 9/10 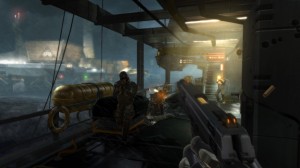 Gameplay: Since there are only two locations in the DLC, on top of repeated visuals the gameplay and backtracking will be repetitive as well. Honestly, I didn’t find it that bad but it would’ve been nice if the settings were slightly bigger and not reused as much. The other handful of issues with The Missing Link are the difficulty spikes during the first half hour or so (enemies are relentless and supplies are scarce in the beginning) and the body scanners. The body scanners aren’t that bad but they chop up the flow of the game a bit, although I think they are a more stylish alternative to the traditional loading screen. With all of the gripes out of the way, the original gameplay is back and better than ever! The Missing Link definitely favors hacking and stealth, but I found things to be a lot less frustrating when I had a fair amount of guns and weaponry at my disposal. Speaking of weaponry, supplies are limited and praxis kits aren’t given out that generously, so it’s a smart idea to stock up and grab what you can when you can. The AI is a little more challenging than that of Human Revolution’s campaign, but I’m happy to say that the difficulty only adds to the fun. Gameplay: 9.5/10

Length: The DLC lasts about three and a half hours. Not the longest downloadable content for a game I’ve ever encountered, but definitely nothing shabby. Length: 7/10

Overall: The Missing Link gets an 8.6/10! Not quite as vast and expansive as the original, but for anyone simply craving more Deus Ex, it’s a must buy.