Is the newest Final Fantasy any good, or should it really be the FINAL Fantasy? Read on to find out!

Presentation: The game looks super slick from a graphical standpoint, and the visuals are just outright amazing. Not the best I’ve seen, but very close to it. On another note, I also really liked the immense amount of CGI cutscenes. Really, first Soul Calibur V and now this… I hope this trend continues. Presentation: 9.5/10

Gameplay: This is where things get dicey. First of all, the game starts you off with almost no tutorial, leaving you to fend for yourself. Now, if you’re like me and have never played a Final Fantasy before, you’ll be caught way off guard and totally unprepared for the challenge this game throws at you right from the beginning. Final Fantasy does NOT hold your hand, whether it be when you’re trying to figure out your objective or when you are struggling in a terribly unbalanced battle. The game even neglects to tell you that there’s an upgrade system! I mean seriously, I had around ten thousand upgrade points by the time I found out I could enhance my characters. Aside from that, there are loads of repetitive fights due to enemies that constantly appear out of nowhere, and it just downright ruins the pace of the game. All complaints aside, this game does have good RPG mechanics for the most part, and has some really cool Cinematic Action (Quick time event) moments. From a beginner’s standpoint though, this game is brutal on first time Final Fantasy players and is probably the most unexplanatory and harsh game I’ve played in a very long time. Gameplay: 2/10 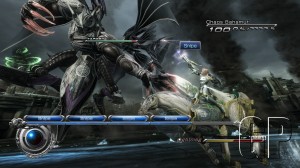 Length: Well, if you play the full twenty hours, ten of which is just mindless grinding to rack up XP, you’ll get your money’s worth. If you don’t care for grinding and boring, repetitive encounters this game will probably last you somewhere around… an hour and a half. Length: 2.5/10

Overall: Final Fantasy XIII-2 gets a 5.5/10. A pretty bad kick-off to 2012’s gaming year, but maybe that’s just because I’m a beginner. With that said, if you liked previous Final Fantasies this game will probably be similar enough in style to enjoy, but if you’re new to the series this is a terrible game to start with.