Does this HD remake of the original show how far the series has come, or is it a rehash you shouldn’t spend a penny on? Read on to find out! 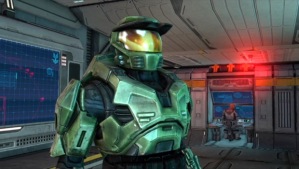 Sound: It’s Halo. Not exactly the most amazing soundtrack I’ve ever heard, but for a somewhat generic first-person shooter it’s pretty good. Dialogue is bland and the story is pretty much one big explanation as to why you’re shooting everything in sight. So in all honesty the biggest sound this game delivers is gunshots. Sound: 6.5/10

Presentation: On top of the totally redone and visually impressive new HD graphics, there’s also the option to switch seemlessly to the classic XBOX graphics, which is a really cool feature which really goes to show how much graphics have improved over the years. Environments are surprisingly varied, which keeps things feeling fresh. Presentation: 8.5/10

Gameplay: It’s about as basic as an FPS goes. A little first-person platforming, then random spraying of your gun, and rinse and repeat. Again and again. Now, I’ll admit the gunplay, although repetitive, is addicting and fun. But what I’m not so fond of is that during missions after you’ve worked your way through an entire level of mowed down and bloody-ed up aliens, most objectives have you backtracking the entire area to get right back to where you started. In my opinion, it’s a REALLY cheap way to lengthen the amount of time you play. Like, it seriously pisses me off. But other than that, the game is pretty good about offering fun variety with a large array of vehicles to drive, and a huge mass of different guns to loot from dead alien bodies. Fun stuff. Gameplay: 7/10

Multiplayer: A collection of what are supposedly the best six maps in Halo multiplayer history, there are a handful of different modes and settings so that the basic four on four battles stay fresh for quite a few hours. Although there definitely needed to have been more maps and modes for this new addition to the Halo series to live up to its predecessors. Multiplayer: 7/10 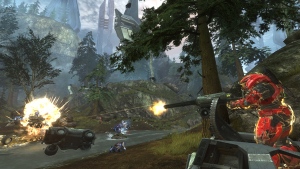 Length: Unlike most FPS’s out there, this game actually bothers to make a decently lengthy campaign (although because it’s a remake that was sort of granted). Ironically enough, in this game it’s the online experience that I thought was lacking a little. Still, quite a few hours to be had with Anniversary. Length: 7.5/10

Overall: Halo Anniversary gets a 7.1/10! A great HD remake that has enough new and nostalgic touches to make it a worthy purchase for any fan of the series.