After playing the HD remake of the original, I decided to take a gander at the most critically acclaimed Halo of all time. Is it as good as they all say? Read on to find out! 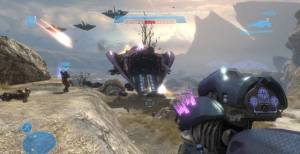 Sound: The music is amazing. It’s eerie, it’s tense, it’s everything that should compliment a snooping soldier with a wicked big gun marching into uncharted alien-infested territory. I actually jumped a few times due to the music becoming so tense at certain moments in the game. Sound: 9/10

Presentation: Reach looks amazing, to put it simply. Not the best I’ve ever seen, but pretty slick none the less. I think there could’ve been a little more detail, but that’s my only gripe. Presentation: 9/10

Gameplay: The gameplay is summed up by shoot. Walk around an area. Shoot some more. Like Anniversary, I find this simple and repetitive gameplay extremely addicting, so I enjoyed its simplistic nature for what it was. Although the first-person platforming got a little tedious at times, it didn’t ruin the experience. There’s lots of different guns and lots of different locations, so things never feel like too much of the same. I also thought the massive array of vehicles to drive and fly were a great addition the game. I only have two major gripes with this game. A.) That it’s almost impossible to do on your own in terms of difficulty, and B.) there was a terrible glitch at one point which cheated me out of an achievement and stopped me from progressing through the level. But it was fun almost all of the time, with these few minor exceptions. Gameplay: 7/10

Multiplayer: Reach has one of the best multiplayer experiences I’ve ever played. There are loads of modes (over twenty at first glance), plenty of maps and hundreds of character customizations to be made. There are a few minor kinks (online lag, bad respawn points) but other than those the online gameplay is amazing. Multiplayer: 9.5/10 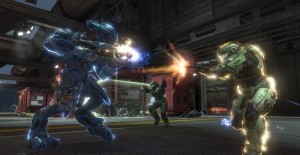 Length: The campaign is really short, ending at just under five hours. The online multiplayer though could keep you busy for hours upon hours. Length: 8.5/10

Overall: Reach gets an 8.6/10! A great game that I think everyone should check out. It’s definitely one of the better first-person shooters I’ve played.