This is going to be an interesting series of reviews. They’re going to be a look back on and improvement of past reviews I did when I was just starting out on this blog. They’ll go in-depth and be much more insightful than the originals.

So what better a game to start with than Sonic 3’s port on WiiWare? Here’s my original Sonic 3 and Knuckles Review, and as you can see I’m dividing it up now so that both Sonic 3 and the Knuckles DLC/sequel each get their time in the spotlight. So, on with the review!

Sound: The music for Sonic 3 is the snappy 8-bit music that everyone says made up the blue hedgehog’s musical golden age. It’s quirky, wonky, and of course speedy. And when talking about Sonic 3’s music, how can I not mention Ice Cap Zone and its amazing BGM. It remains one of the best songs in the series to this day. Sound: 9/10

Presentation: With new character animations, even more visually stunning blast processing level visuals and a true 3D graphics for the bonus stages, this game was revolutionary for its time and could still teach quite a few of the modern day Sonic titles a thing or two. The framerate is steady and always manages to keep up with the insane speed of the onscreen character, and everything looks just as it should. Presentation: 9/10 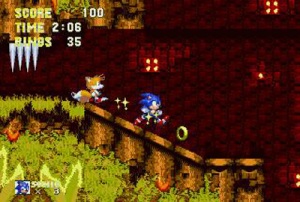 Gameplay: The gameplay sticks to the basic Sonic formula while creating optional diversions for players wanting something new. The traditional gameplay is still as fast and platforming-y as ever, with level designs having bigger, faster and more branching paths than ever. Neat little stage gimmicks are in each one as well, like ice blocks in Ice Cap or balloons and barbershop poles in Carnival Night. All of these work fantastically with the Sonic playstyle and feel like an improvement upon Sonic 1 and 2. But that’s just for the main blue hedgehog! Without Sonic and Knuckles attatched, Tails is still a playable character and can fly, adding a new variable into the gameplay. It’s still Sonic’s levels, but all of those higher areas that were previously untouchable are now accessable and add further depth and exploration into every pixel of every stage. Lastly, there are the special stages which remain jaw-breakingly difficult but strangely addictive and unique, being giant “collect the blue sphere” minigames on a giant orb. Sounds simple, but my god it’s tough. Gameplay: 10/10

Multiplayer: Splitscreen racing is always hard to keep track of, but is still fun. If you have a big enough screen, you and a friend can have a great race against each other, especially with the unique multiplayer stages. Multiplayer: 6.5/10

Length: With two different playable characters, six zones and a lot of hard special stages, Sonic 3 offers quite a bit of content to keep it from getting dusty. Length: 8/10

Overall: Sonic 3’s re review gets an 8.5/10! Not a strong multiplayer title, but definitely one of the all-time best platformers available. It’s without a doubt worth picking up for gamers of all ages!