You know creativity in Hollywood is running low when they start basing million dollar budget movies on Hasbro board games. 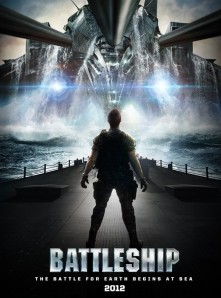 Battleship is an extremely loose adaptation of the classic game, following Lieutenant Alex Hopper (Taylor Kitsch) through what starts as a RAMPAC naval sporting events tournament and ends as an explosive battle against aliens. It all began when in 2005, NASA discovered an earth-like planet in another galaxy and transmitted a signal to it. During one of the RAMPAC events, NASA gets their response in the form of five alien spaceships crashing on to earth, directly where Hopper and the events are being held in the Pacific on the coast of Hawaii. When the aliens land, they create a barrier that encapsulates Hawaii and leaves only three Destroyer boats inside. The crew of the Destroyers must take out the aliens before they can signal their home planet and take over earth. It’s quite the setup.

Their plot has many merits, the biggest no doubt being the accurate representation of a world invasion. Every major superpower on earth is involved, and every part of the globe is impacted by the threat of alien extinction. I like that, and it feels like a much better representation of how the entire world would react; not just the United States. Even better, the plot makes it so that the only possible solution to the problem is completely on the US Navy’s shoulders, keeping the movie patriotic as we’d expect.

Another nice addition is how the producers managed to set up a scene where the movie turns into a life-sized match of Battleship. The scene itself is feasible, surprisingly and is a great treat to fans of the classic game.

As far as acting goes, it isn’t the strong point of the plot nor of the movie. Kitsch is okay as the once a slacker now a hero main character, but it’s obvious he didn’t give Battleship his all. Brooklyn Decker is the attractive girlfriend that plays the makeshift side hero, and for that position her acting is plausible. Captain Nagata (Tadanobu Asano) easily makes the best performance by showing substantial character development and simple yet effective acting style.

Battleship comes pretty darn close to being a movie worth the price of admission, but doesn’t quite make it. The flashy explosions and stunning CGI is close to Transformers and the plot is the best we’ll get for an alien invasion flick, but the characters/actors just sink the movie. They don’t evolve or react well according to the situation on screen, which creates serious detachments from the movie and makes the entire two hour adventure feel disappointly pointless.