After seeing Battleship, I was desperate for a good movie. And then MIB 3 came out. 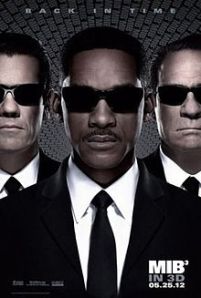 The story is nice, especially considering it’s one of the few time-travel movies to have minimal plotholes. Everything ties neatly together by the end and it feels like a complete adventure. The story, put simply, is that Agent K (Tommy Lee Jones) has been killed by Boris the Animal (Jemaine Clement) through the use of time travel. Upon discovering this, Agent J (Will Smith) travels back in time to team up with young Agent K (Josh Brolin) and defeat Boris before K gets killed. A neat plot, and definitely opens up a lot of joke material that the directors used effectively.

As mentioned above, the jokes in MIB are good. Really good. Some made me laugh out loud, and some were so clever I didn’t laugh until about a minute later (making me look downright stupid in the theater). Regardless, the humor is top notch and takes advantage of the fact that Will Smith is in 1969 and not 2012. The jokes even manage to encapsulate the touchy subject of race (in 1969) in a lighthearted manner, making things feel both more realistic and fun.

The other side of MIB is in the action, which I’m sorry to report is tensionless. When action happens, it just happens. Very rarely is there a dramatic build-up, and a lot of fights could’ve benefited from some sort of extension. But the action is cool none the less, and they even have those epic cycles that General Grievous had in Star Wars Episode 3! Another big plus to the action is the movie doesn’t take the easy way out with magic beams and whatnot in close range fights (Captain America, ahem). Instead, the villain shoots spikes out of his hand that leave the victim bloody and clearly dead. Not to sound morbid, I just hate it when something that should clearly be graphic in a movie isn’t. It’s my violence pet peeve.

The acting is top notch, just like we’d expect from a Men In Black film. Will Smith plays himself and does an amazing job at it, which makes me wonder: Where has he been for the past, like, five years in movies? He’s funny, clever and classy in a Will Smith sort of way. My only gripe with his performance is that he cries too much in the adventure, making him look like less of a boss than he should. Tommy Lee Jones is great for the ten minutes or so that he’s in the film, being as dryly comical as ever. But none can top the almighty Brolin. For this film, Josh Brolin is where it’s at. He is the perfect past Agent K and delivers a top notch performance, being just as good of an MIB agent as Jones. 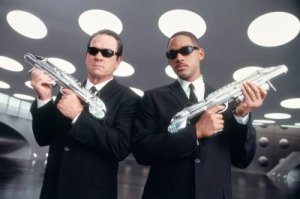 Overall, Men In Black is a good movie on all accounts. It may leave something to be desired in the action, but that’s easily overlooked by the tight plot and outstanding acting. I recommend seeing this is if you want to wash the bad taste of Battleship out of your mouth.