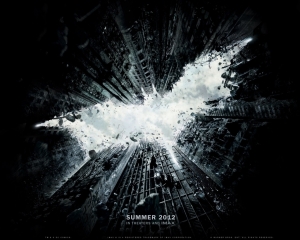 In a world where franchises are overstaying their welcomes in theatres, Nolan knows it’s time to end the Batman story. So he unleashes Bane (Tom Hardy) upon Gotham, and creates the most devious, destructive and dark scenario a city could ever go through. Previously, Bruce Wayne (Christian Bale) had hung up his cape and stayed locked up inside Wayne Manor for eight years in self-exile. But when Bane comes to town, Batman pulls out all the stops and tries to be a superhero again. Without spoilers, it’s these moments that are hard to watch because Wayne hasn’t been in a proper fight for years, and seeing him get his ass handed to him just hurts and makes you shudder in your seat. But it’s a necessary part of the plot, and what a plot there is.

Dark Knight Rises covers every possible plan for destruction of any action-drama ever, with hostage situations, wall street stock crashes and gorgeous football field explosions. It’s involved, and so is the villain who plans all of it. Bane, at first, seems to a giant blundering brute with no intelligence, but quickly changes that. Within an hour of the film, you see his smarter, craftier side unfold as he becomes Gotham’s reckoning and puts millions of peoples’ lives in the balance with a number of unbelievably cruel actions, like letting loose a prison of deadly inmates and hanging dead police from cranes on nationwide TV.

Frankly, things get so depressing at points that I wouldn’t blame you if you left the theatre entirely, because I nearly did. And who is here to stop Bane’s rampage? Just Batman and Catwoman (beautifully portrayed by Anne Hathaway). Of course, the bat has some assistance from Alfred (Michael Caine), Fox (Morgan Freeman) and James Gordon (Gary Oldman) but like Wayne, they’re all out of the superhero lifestyle and can’t really settle back into it when Gotham goes to hell. As far as acting goes, they all portray their characters fantastically. Alfred almost seems like a mentor to Wayne, in that the stuff he says leads you to believe he wanted to mold Bruce’s life into a happy one with a wife and kids, which really hits home. Gordon and Fox are instrumental in the movie’s plot, and handle such big roles well. Of course, Christian Bale is just 100% bad-ass 100% of the time, but the real shocker here is Anne Hathaway. As critics have already said, she is THE defining Catwoman. Smart, slick and sexy are all choice words for her shadowy role as a thief and later Batman’s unwilling ally.

With such an awesome and complex plot complemented by amazing actors, the last piece of Nolan’s cinematic puzzle lies in the action sequences, and holy crap are there action sequences. Ninety-nine percent of this movie was real, meaning that the majority of those colossul tanks and flying Bats were actual models doing the actual stuff. Of course, some of the more sky-high scenes required CGI, but otherwise the movie felt unshakably real because it was. The fights were on a gargantuan scale, covering almost all of the city, and they were just amazing. The trailers lead you to believe the action is big, but you don’t fully understand that until seeing how freakin’ huge the fights turn out to be.

My only issues with The Dark Knight Rises would have to be the quick superhero fixes and the somewhat dragging runtime. The quick superhero fixes, without spoilers, can be summed up by one moment in particular: Wayne escapes from a very hot and dark place (not saying where to preserve plot), and somehow manages to get inside Gotham which is under quarantine and no one has been able to enter or exit from for three months. But of course, Wayne just manages to slip in as easy as a piece of cake. The runtime is the other flaw, but very minor. There were a handful of moments where I was almost bored, but luckily Nolan understood this and threw a bone in every couple minutes to keep things from snore-worthy about halfway through the movie.

The Dark Knight Rises excels and capitolizes on what made the first two Batman movies so good: It’s gritty, it’s dark and it’s THE BATMAN. While I still prefer Batman Begins as my personal favorite of the trilogy, The Dark Knight Rises shares a lot of similarities with it and is quite the experience. While parts of the movie drag and parts of the movie are unbearably depressing, the last thirty minutes makes everything worth it and can only be described as the best ending ever to anything I’ve ever saw. So, it gets my Gamerrob seal of approval, a solid four out of five stars (the dragging moments seriously brought the movie down from a clean five out of five) and a recommendation to go out and see this movie before you do anything else after reading this!

NOTE: At the time of me writing this, I’ve just heard about the midnight premiere shooting in Aurora, Colorado. The shooter is undoubtedly a loony jackass, and you shouldn’t let this influence your viewership of this Oscar-worthy film.