Even with all of the big shooters that I’m going to be reviewing soon (Rysiscay Wotay and Axmay Aynepay), I’ve decided to take a little detour down memory lane with some classic Sonic games. So without further ado, the review of the original Sonic the Hedgehog’s Xbox Live Arcade incarnation! 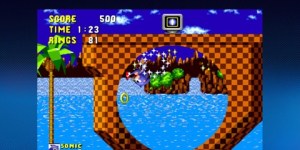 Story: Blue hedgehog Sonic  has had all of his furry friends kidnapped by the keeper of the spare tire, Dr. Robotnik. So he takes it upon himself to roll, jump and run through various zones to free his friends in the end-level canisters! Oh, SEGA. You had such a good formula here. Why’d you have to pull a Sonic Adventure 2 plot on us and start one of the worst trends ever.

Sound: Honestly, I didn’t find Sonic the Hedgehog’s music amazing. I think this was the stage in SEGA’s history where the developers were just testing new, funky music (which would later evolve into Chemical Plant’s amazing BGM [next review, people]), so Green Hill zone and the like were pretty memorable and gnarly tunes for the time. Compared to other tracks in the series’ history, though, they’re not so great. On the other hand, the sound effects were great, and that satisfying *bling* ring collecting tune being my most memorable gaming sound effect ever. Sound: 7/10

Presentation: For the time, this was a good start to the Genesis era. Not the peak of its capabilities, as would be later seen with S3&K, but a good start none the less. Environments were colorful and varied. Presentation: 7.5/10

Gameplay: Without the spindash, the gameplay is numbed down to run, jump and… run. It’s fun, don’t get me wrong, but with some serious design flaws in the level layouts a spindash-like move would’ve been seriously appreciated. And I see that the developers were trying to make momentum and speed a reward for good gaming, but even so, gaining that level of speed is only possible in two zones while all the others are slow-paced platforming fests. Gameplay: 5.5/10

Length: With only a handful of zones and only chaos emeralds as collectibles, the entire game can easily be finished within two hours. Length: 4/10

Overall: Sonic the Hedgehog gets a 6 out of 10. Honestly, I didn’t enjoy it that much and, like the classic Halo, don’t see how it managed to accumulate such a big following. What I do see is that is that it started a lot of gaming trends and created some of the most innovative and memorable moments in gaming history, and I’m happy SEGA improved upon it to give us what we have today.