Darksiders 2 was wayyyy overhyped, to put it simply. Really, people saying “Dudez this is so my GOTY” have either never played the incredible source material this game freely borrows from, or have no idea what a great third-person open world game is. 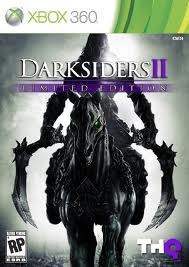 Story: Death, one of the Four Horsemen of the Apocolypse, is riding his flaming blue pony throughout heaven and hell, trying to fix the crimes done by his brother, War. But, as any good adventure goes, he gets completely side-tracked and has to take down the big bad corruption monster infecting the universe before he can continue his righteous quest to help his brother.

Sound: The music is pretty great, I’ll admit, and that’s probably because it’s only part of this game that’s original. The entire soundtrack is orchestrated, so when you’re slicing up piles of blood-coated demons, you’ll be hearing a soothing harpsichord, and surprisingly enough it’s sort of nice. As far as voice acting goes, it’s pretty good too. Death has some really witty dialogue that kept me entertained, and asked the questions I wished I could, like “Why the hell am I doing this stupid mission”. Sound: 9/10

Presentation: Why are people giving this game ridiculous praise for its art style. Seriously, when I play it all I see is near-SD graphics with just a hint of artistic flair. Every character looks like they’ve been on steroids since birth, and the monsters don’t fare much better. Environments look pretty on the eyes at first, but given a little exploration, you soon realize the developers just copied and pasted massive chunks of level all over the place. Presentation: 6/10

Gameplay: You’ve got two weapon types, your light and your heavy. Sound familiar? And when you’re not using two buttons for the entire combat portions of the game, you’re platforming, e.g. running across walls. *CoughPrinceofPersiacough* But really, this game takes the structure and properties of Skyrim’s dungeons, waters them down, throws in Prince of Persia parkour and tops things off with super simple combat ala X-Men Destiny. Yeah, I went there. Now, playing the game isn’t always as bad as I’ve made it out to be. Once in a blue moon, a dungeon is made well enough that all of these seemingly good features collide and make a rather enjoyable experience that really feels like its own game. But ninety percent of the time, that isn’t the case.
Reasons for this game not being consistently enjoyable are as follows: A horrible objective marker (your pet crow that flies around aimlessly, supposedly “helping” you), repetitive and silly puzzles, a bad loot system and the lack of proper in-game barriers. Now, the first two are pretty self-explanatory, but it’s important I elaborate on the latter. The loot system is based on your level, which leads to either severely underpowered gear or ridiculousy overpowered weapons and armor. Really, for the first half of the game I was struggling to get past the simplest quests because I had sh*t gear and weapons, but when I finally found some decent stuff every chest was an instant jackpot and enemies got mowed down like toothpicks. With that out of the way, I can further explain the problem with there being no in-game barriers. In Darksiders 2, you can go wherever you want, whenever. At first, the freedom sounds awesome. But then, you grind your way through a dungeon for fourty minutes, find that you can’t beat the level 20 boss at your current level of 10, and either A.) leave the dungeon and kick yourself, or B.) write a review of this game saying that this is a stupid flaw that could’ve been fixed sooo easily. Seriously, make every dungeon have a level-specific key that you only get when given the quest.
Lastly, the boss battles. This isn’t as much of a gripe as an awareness announcement. So, most of the boss battles consist of you slicing away at a giant bad guy’s shins, right? Well, when Prince of Persia: TFS did this, it got flamed, hard. When Darksiders does this, “ZOMG the boss battlez are sooo crazy good”. I really don’t like pointing out other reviewing sites hypocrisy, but what the hell IGN? Gameplay: 2/10 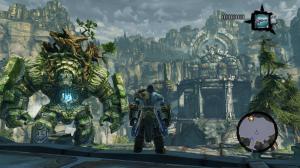 Length: Well, a dungeon crawler is always lengthy, so props for meeting the minimum THQ. But when you’re traversing the game’s massive maps, you’ll often think “Jeez, why so much open space for so little content”? Then, you’ll Google Darksiders 2 DLC and see that THQ intends on filling up that map space with extra levels built DURING the original development, but set aside to be sold seperately later. Really, this nonsense was fine with me in money-hording FPS games like MW3 that I never waste my money on, but in a single player action adventure? No, I don’t think so. So THQ (and Vigil Games, for that matter), will you be convincing me to buy any of this supposed premium content? No, instead you’ve swayed me to buy the game off of eBay, later sell it back to Gamestop, and lose only a total of seven dollars while not supporting your company at all in the process. Length: 2/10

Overall: Darksiders 2 gets a well deserved 4.8 out of 10. It had the making of a great game, buried deep beneath THQ’s corporate bullsh*t and Vigil Games’ poor development choices. But really, it’s just not entertaining. I sincerely mean that, as sometimes I just turned off my Xbox, not compelled enough to even continue playing. Instead, I’d reminisce about some of the great games (and then there’s X-Men Destiny…) it directly copied from. So my final verdict is to not waste your money on this, and let THQ dig its own grave.