I really liked the original, so I went into this demo with high hopes. I didn’t walk away disappointed. 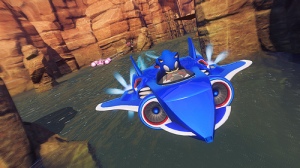 The gameplay for the cars feels a little looser and less hefty, but I was playing on a PS3 so it might’ve just been the controller throwing me off. As far as the boat-racing mode goes, the water physics are fantastic. There’s just enough control that you can maneuver with skill, but enough resistance that it feels like you’re actually on a boat. I didn’t get to try the demo with the jet-mode, but the person next to me did and it looked pretty solid as well.

My only gripe with the courses would have to be that they just felt sort of linear, and less involved than the previous game. Of course, I’ve only played and seen two full tracks, so hopefully the other tracks included in the game have a better sense of grandeur.

Click here for my live footage of the game from NYCC 2012’s show floor!