Alright, to kick off this demo analysis I’ll admit something extremely important: I didn’t physically play it. Yes, Capcom had five different TV’s with it, but the demo was a twenty minute chunk of gameplay and the line was wrapping around walls like a king cobra, so I just opted to spectate with my camera. 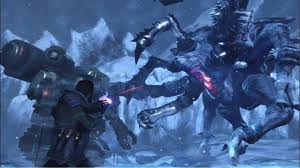 So, from a spectator’s viewpoint, this is what I saw: “Gears Lost: Planet Wars 3”. And then it opted into some kind of “Call of Lost: Black Planets” stuff and all in all I wasn’t extremely impressed. It starts out as a Gears of War 3 clone, just not as impressive graphically. Then it transforms into Call of Duty where you’re inside a first-person turret thing and just whail on anything and everything. I didn’t even see a proper cover system, but maybe that’s just because I was watching a noob.

On a final note, from what I saw, Lost Planet 3 is looking like a rental-only title already. But don’t take my word for it, judge for yourself with this live LP3 gameplay!