If you’re a skeptical type and didn’t heed my advice earlier to just go out and see the freakin’ movie, I guess you’re waiting for a proper review. Well, you’re in luck because I need to gush more about Wreck-It Ralph. 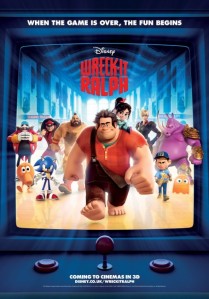 Alright, so plot overview is short and simple: Wreck-It Ralph, bad guy, is sick of being bad. So, he goes about trying out different games in an attempt to be considered a hero, but all that does is get everyone into big trouble. A LOT more happens than just that, but spoilers are uncool so I’ll end it there.

So the movie is obviously kid-friendly. But that doesn’t mean it’s geared towards kids! Sooooo many classic game references abound in the first hour that it’s like swimming in pixel-filled memory lane. From fan-favorites such as Dig-Dug, Pacman and Frogger to more recent characters like Subzero and Shuma-Gorath, your inner-nerd will die, be reborn and die again, repeating the cycle until you’re numb with glee. Not to mention Sonic the Hedgehog on a movie screen (I can barely resist jumping up and down in joy while typing that).

Another important if minor thing the movie does right is the humor and puns. It’s hard for a movie to get that right, whether it be Disney animated or not. But Wreck-It Ralph forms a new standard for cheesy jokes that all other movies must worship and follow from henceforth ’til Wreck-It Ralph 2!

The movie can’t just rely on good humor and references though. It’s gotta have substance, and wings of its own so it can fly and become its own movie. And Wreck-It Ralph soars, with flying colors. I practically cried in one scene, and a movie about video games has got to be pretty darn good to extract that level of emotion. Not only can it be a solid tear-jerker, but the plot itself unfolds into this gorgeous, sprawling adventure that the trailers don’t even hint at.

The voice acting was on par with the rest of the movie, which is to say, AMAZING. John C. Reilly, Jack McBrayer and Jane Lynch all provided top notch performances, and even the woman who voiced Penelope Von Schweetz grew on me.

One thought on “Review of “Wreck-It Ralph””