I am the movie reviewer of the United States *Bam!* clothed in immense reviewing power! 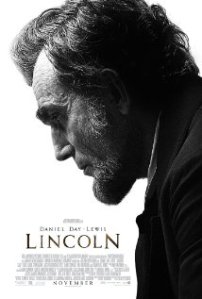 But in all seriousness folks, it’s Thanksgiving today here in the U.S. which is a time to reflect on our great country and all the things we have to be thankful for.  I think the best way to do that is with a review of Lincoln, the historical movie about one of our greatest presidents and his fight for equality.

Lincoln sounds exactly as the title makes it out to be, a story about Abraham Lincoln and his last few months as president. He fights to get the 13th amendment passed (freeing slaves) while also attempting to end the Civil War.

Being historically accurate, no leaps or dramatic theatrical touches are added, other than a little dramatic timing and whatnot. In some cases that’s a good thing, but in others it makes the two and a half hour story drag a little. On a better note, the entirety of the movie is filled with passionate and clever dialogue, all delivered by pro actors such as  Daniel Day-Lewis and Joseph Gordon-Levitt. All of the acting is amazing, and multiple Oscars will surely be in order by the end of the year for their outstanding performances.

Even so, I can’t help but feel the movie lacks entertainment value. If this were shown in a highschool in place of textbook review, it’d be fantastic. But ten dollars to see it in a theatre? Not quite worth it.

With that said, I’d like to conclude my brief Lincoln review with one last message: Happy Thanksgiving movie-goers, gamers and everyone who has lots to be thankful for!

One thought on “Review of “Lincoln””