This’ll be the last Vita review I do for quite some time, due simply to the fact that I’ve recently sold my Vita. Maybe I’ll do a PS Vita retrospective? Regardless, you’re here for an ACIII: Liberation review, so let’s find out if this portable Assassin’s Creed is worth your money. 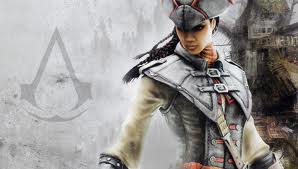 If you’ve ever played a traditional Assassin’s Creed game, you’re pretty much getting the same thing here. Now, I could go further in-depth to explain what a traditional AC game is like, but chances are if you’re reading a review for this game you’re already a serious fan of the series. Colossul open world maps, LOTS of AI citizens (albiet not as many as the game’s console counterparts, but due to processing power that’s understandable), silly sidequests and lots of horrible accents for the French characters. It’s the classic, tried and true AC formula that hasn’t seemed to fail… until now, that is. I’ve never been truly bored playing an AC game up until this one. Sure, there was the novelty of playing it on the Vita for maybe one or two story sequences, but around a quarter of the way through the campaign, things begin to get repetitive. Not even because the game is boring, it’s really not, it’s just that if you’ve played even one AC game before, you’ll know exactly what to expect.

It seems Ubisoft is starting to paint by numbers with this series; if the first game was a hit, why not release fifty more in rapid succession? Not to sound negative, it’s just that Liberation is forgettable. The open world city of New Orleans is impressive no doubt, really stretching the Vita’s limits, but it’s just not enough to absorb you into the game’s story. I mean, heck, there’s nothing new here to pull you in at all. If anything, there’s actually just a list of grievances I have with the game.  For me, the biggest turn off was the voice acting. Every time the game tries to establish the supposedly “intriguing” story with a cutscene, all I hear are some horrible Canadian-French accents. No offense to Canadians, and I understand this was made by Ubisoft MONTREAL, but still. For a plot revolving around slavery and conspiracy, I shouldn’t be giggling constantly at the horrible voice acting.

The gameplay doesn’t feel hefty either, feeling like an overly complex beat ’em up instead of a classic AC game. I think that’s solely because of the lack of a rumble component in the Vita, unlike most controllers which will vibrate during combat. It’s a minor gripe, but worthy of mention.

To be quite honest, there isn’t a lot wrong with this game. The locales are fantastic, the graphics are good, the soundtrack is solid and the controls are top-notch. But it doesn’t bring anything new to the table, doesn’t motivate the player to continue due to lackluster story telling, and isn’t worth anything over twenty dollars.