I really didn’t like Crysis 2. To put it bluntly, I thought the story was drab and the core gameplay didn’t fare much better. Honestly, Crysis 2 only really struck my fancy online, and even then I only kept the game for a few days. So how does this third installment pan out? In a time of game development where sequels of sequels (ACIII, Dead Space 3, Mass Effect 3) tend to suck and reflect poorly on their franchises, does Crysis 3 break the trend? I’m here to report no, not really. 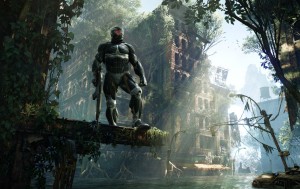 Now, I actually went into this game with a positive outlook. Sure, I didn’t like Crysis 2, but this one had a Katniss Everdeen bow and giant dams that you could blow up! So it must be better, right? Well, as far as setpieces go, it’s definitely an upgrade from its predecessor. Hell, in presentation as a whole it’s better than Crysis 2. The main characters, Prophet and Psycho, actually have a somewhat real bond with each other and we get to see personalities of these characters that were previously unknown to the player. Their journey actually means something to us this time around, which is a good change of pace from the series’ reputation of barebones plots consisting of “some aliens invaded, go shoot the mothership” and nothing else. From a graphics standpoint, Crysis 3 is also a major improvement. It’s taken the Xbox as far as it can go, and honestly makes me question why we even need a new generation of consoles with new tech specs when we already have games like Crysis 3 around.

Further improvements in the presentation of Crysis are most obvious in the musical score. The first two hours of the campaign have some of the best sci-fi shooter music I’ve ever heard, and it REALLY got me sucked into the experience. The only thing that pulled me out of said experience is when I encountered a couple of odd audio bugs, like voices becoming obnoxiously tinny/static-y and the rare instance where a character would say two voice clips over each other.

Where Crysis 2 failed me was in the campaign and the core gameplay, and I can say without a doubt I had more fun in Crysis 3’s campaign, even if that’s not saying much. The gameplay is only marginally better, and about ninety percent of that is due to the abundance of cool environments to traverse and the Predator Bow. Roaming around the urban jungle (literally a jungle) of a destroyed New York City hunting paramilitary “CELL” units with your extremely lethal folding bow is literally the definition of bliss, and taking out enemies by the dozens in the shadows is a blast. And, when the enemies ramp up in difficulty later in the campaign, you still have the option from Crysis 2 to cloak yourself and just run past everything. The only difference between running past everything here and in Crysis 2 is that unlike in 2, here it doesn’t overstay its welcome. Crysis 3’s campaign only lasts about four hours, give or take a couple minutes. For a game where you could hypothetically run past everything right to the end, four hours seems like a more appropriate runtime than Crysis 2’s nine to ten hours.

When you wrap up the campaign, there’s the online multiplayer, which is just an extension of Crysis 2’s multiplayer, with the addition of the fantastic new “hunter” mode and a mode that lets you play the multiplayer maps Call of Duty style. All this does is infuse campaign gameplay into competitive multiplayer, and if you want any further detail than that go check out my Crysis 2 review. Long story short, it’s a fun destraction for people sick of generic FPS multiplayer, but on the other hand, it’s nothing more than that: a distraction. It’s a time passer, and I can firsthand say that within a month or two the online community will have dwindled to almost nothing.

Overall, I liked Crysis 3 a lot more than Crysis 2. The overall package just felt slicker, grander and more competitive online, leaving me with a sense of pleasure that was absent at the end of Crysis 2. From an objective standpoint, Crysis 2 is by far the superior game, but if you like big setpieces, wicked music, state-of-the-art graphics and a currently bustling online community, Crysis 3 is the game for you. And when I say Crysis 3 is the game for you, I mean it’s the game to RENT for you. DO NOT GO OUT AND BUY THIS GAME. It’s fun for the scares and giggles, but you can experience everything this game has to offer in under seven hours. It’s worth a five dollar rental, but sure as hell not sixty bucks.