A witch who battles giant Hindu Gods to melodramatic music with giant fists made out of her hair which is also her clothing? Yeah, Bayonetta is quite the game. 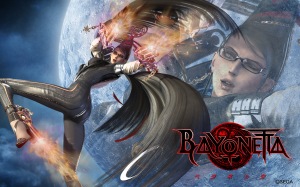 Bayonetta has a story that’s all over the place, but the jist is that she’s fighting all of Heaven, which is quite the task. If she can’t succeed in this, she’ll get dragged down to hell or something, which eventually forces her to take down God.

If the plot doesn’t strike your fancy or you take religion very seriously, Bayonetta might not be up your alley. But for the gamer who wants something as equally taboo as it is raunchy, this game has the story for you. Fusing sexual humor with cheesy dialogue and tons of video game references serves as a recipe for success in Bayonetta’s over the top and borderline inappropriate story telling. The great voice acting only helps to complement all of this, being as dramatic as Shakespeare yet as wry as Seth Macfarlane, a combo oozing with style.

To complete Bayonetta’s over-the-top presentation, the visuals are second to none in the insanity department. One second you’re looking at angelic monsters as big as warehouses and within the blink of an eye your giant fists of hair are smashing them to gory chunks. It’s almost like watching an anime; minus the overly voluptuous girls and random shower segments. While the graphics aren’t cutting edge from a technical standpoint, they are a feast for the eyes none the less.

With insanity like this going on in just the game’s narrative, how crazy must the actual gameplay be??? The answer is: very. There are four mechanics: Shooting, a heavy and light melee attack, and dodging. These four mechanics intertwine beautifully together, and doing any of them is a cinch. It’s rare that a game has such a strong a sense of fluidity when combined with the fact that it’s also extremely varied, as far as combat goes. There are over a dozen weapons to use in combat, each with thousands of combos of their own. Add in the fact you can have any two of these weapons equipped at any time, and there’s countless ways to take out any given horde of enemies. My personal favorite pair was the “Alt. Durga” flaming electric kitty-boots combined with the Shuraba long sword. Not only could I set enemies on fire AND electrocute them, but I could also dice them into tiny little pieces, which is very appealing to the hack ‘n slash side of my inner gamer. The gunplay, while not very expansive, is the perfect filler for any combo that seems a little lacking, and allows for some solid gunplay action. The dodging mechanic, when used at the last second of an enemies’ attack, triggers “witch time”, which is a slow motion state where Bayonetta can do all of her regular attacks, with the added bonus of enemies being nearly frozen in time. Simply put, dodging and witch time help to really show off just how engrossing the combat of Bayonetta is.

So that the gameplay doesn’t become stale (I can’t imagine that happening in the first place), Platinum Games through in a couple of extremely simple puzzles and platforming bits into the story, to break up the trend of cutting thousands of angels into tiny bits of feather. While it wasn’t necessary, I really liked how it diversified the gameplay, and feel like it was a worthwhile addition.

All of this insanity is compacted into a roughly nine hour journey through the game’s story mode, and that’s all the meat there is to Bayonetta. Now, there are LOTS of collectibles you could play through the game a second time to collect and unlock, but for most people one runthrough of this insane game will be enough. That doesn’t amount to much time at all, but for the average selling price of Bayonetta nowadays (ten bucks, I think) it’s definitely worth it.

If you like all out insanity, a unique female protagonist who contradicts everything Lara Croft stands for, crazy fun combos and button mashing, crude humor and an all around classic adventure, Bayonetta is the game for you.

God, I love Platinum Games. I’ve only played four of their titles (Vanquish, Bayonetta, Anarchy Reigns, and one more which I won’t spoil yet [review on its way]), but they haven’t let me down even once so far. If I could give a best developer award, they’d get a solid platinum trophy.