Not only is Infinite the title of Bioshock, but it’s also the number of awards and quantity of praise this game has garnered. But at the end of the day, Bioshock only truly delivers in being infinitely overrated.

“By God, the man’s said something not positive about our beloved Bioshock. Fetch the pitchforks and the flaming arrows! Burn him at the stake! Trill him with the utmost in internet cruelty via the comments section; make him roast!” -Every Bioshock fan reading this ever

With that said, Bioshock Infinite is not a bad game, as clearly stated in every review since the dawn of man. But where it misses the mark is in its positives to flaws ratio. For every one thing Bioshock Infinite nails on the head, it half-asses in another. To prove my point, the review will cover all of the main components of Bioshock, listing one thing that aspect perfects and one thing it fails at.

Plot: Bioshock Infinite is the story of Booker DeWitt, a broke chump with a taste for blood. He gets an order from his employers to go fetch a girl from the floating city of Columbia, or die for his debts. He chooses the former and rockets on up to the city in the sky, in the hopes of grounding his financial situation but ultimately getting more than he bargained for. This girl he’s after, Elizabeth, can open tears in time itself but can’t control her power, creating a number of alternate realities and horrible situations for Booker to endure. 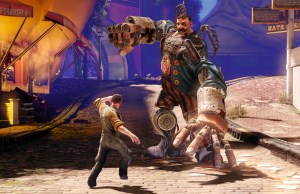 Pro: The floating city of Columbia is one of the most amazing video game concoctions of this generation. Not only is it a polygonal masterpiece from a technical standpoint, but it gives off the 1920’s vibe is tries so hard to achieve. Barbershop quartets serenade you down the streets in floating trolleys, all the women wear those oversized bonnets from days of old, and Booker DeWitt (you) says phrases like “much obliged”. I really felt teleported to this time period, even without a tear from Elizabeth.

Con: As for the ending of Infinite, it’s simply not the magical and mindbending puzzler you’ve been led to believe it is. If you’ve ever seen the movie Looper, you already know the ending, and it’s not a spectacular one. “When the safe door on Infinite’s biggest secrets were finally cracked open, my jaw hit the floor.” Ryan McCaffery of IGN, there were no secrets to Infinite’s plot. Just sixth grade space time continuum logic.

Graphics: Bioshock delivers a gorgeous city with a unique art style, but makes the Xbox and PS3 versions look inferior when compared to PC.

Pro: The art design is amazing. Bright hues fill every pour of your screen, and the whole world is extremely vibrant. Nothing has a sense of drab, and character design is especially colorful.

Con: When inspecting in-game objects closely, you’ll notice some serious fuzz and low quality textures, which, from all accounts, I hear are remedied on PC.

Gameplay: Booker’s adventures take place in the form of a first person shooter, with some Dishonored magic thrown in for good measure. There are just under a dozen guns and precisely eight vigors (magic imbuing potions) to use throughout the game, which leads to a lot of different tactical options throughout. One could go through a section of the game burning every enemy alive with Devil’s Kiss and making them swiss cheese with a machine gun, whereas an equally feasible option would be to go through that exact same section throwing around electrified crows and using only a pistol. There’s variety aplenty in Infinite’s combat department, that much is certain. Other additions to Infinite’s combat are a skyhook and the option to teleport in useful objects via Elizabeth’s tears, but I’ll cover the skyhook in its own section. As for Elizabeth’s tears, they’re great when you can teleport in an ally, but otherwise pretty useless.

Pro: Infinite is balanced so that every new vigor you get will be effective in one area or another. If the classic RPG or burst rifle isn’t doing the trick against enemies, maybe an electrical shower will. Each enemy has their own weakness, which leads to heavy usage of each of the eight vigors. My only gripe is that the last one you unlock, a bullet absorbing shield vigor, really should’ve been the first to be given to the player as it is the most user-friendly and could’ve eased the player into the game. But taken as a whole, the vigors make Infinite an above average combat experience.

Con: There’s just too much combat. Seriously, every new street corner you uncover will be infested with dozens of turrets, automaton soldiers and gun-toting humans. Worse, it feels like padding for an otherwise bare bones second half of the game. The game would’ve been just as good had it ended two hours earlier, forgoing a plethora of pointless firefights. 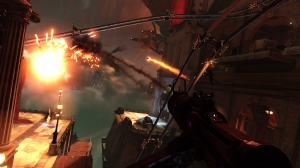 Skyhook: Booker DeWitt wears a skyhook on his arm, allowing him to not only brutally execute close range attackers, but also to cling on to, you guessed it, hooks! These hooks come in two forms: stationary latches and giant rollercoaster beams. Both serve a purpose but the one you’ll really want to take advantage of is the rollercoaster hook component.

Pro: On-rail shooters are finally a good thing. The rollercoaster sections don’t give you much in the way of freedom, but they more than make up for that in sheer exhilaration. Booker soars along these rails faster than the enemy can keep up with, which results in you hopping to and fro on these rails like nobodies’ business. Once you’ve taken enough potshots from the rails and thinned out the crowds, you can do an awesome execution which uses your skyhook to bridge the gap between the rails and your enemies’ skull. Needless to say, the whole thing is a pulse-pounding thrillride.

Con: The skyhook is criminally underused. You only get to use it for one out of every six firefights, which means that when you DO encounter one, it feels like artificial excitement. The biggest complaint with the hooks that I have is that you can’t use vigors while riding them; so no raining fire on your enemies at mach seven. Also, I encountered two annoying moments where I was dismounting from a skyhook and ended up somewhere I shouldn’t have, forcing me to reload my last checkpoint.

Enemies: Infinite doesn’t quite live up to the original Bioshock’s Big Daddy in terms of awesome enemies, but it does hold its own in terms of creativity.

Pro: Two of the mini-boss characters were just so cool that they deserved their own mention. The handyman, a giant metal ogre with doll hands passionately persues you like a lumbering gorilla to a banana. It’s tense, frantic and as a mini-boss he provides the perfect amount of challenge. Another fantastic enemy was the patriot, a ceramic George Washington statue that totes a machine gun in the front and American flags of wrath on its back. He’s not a very challenging enemy, but the design itself is impeccable.

Con: The two mini-bosses that you encounter very late in the game aren’t very creative, and reuse video game concepts that most gamers have grown to hate. Enemy that revives fallen enemies? Check. Enemy that alarms other enemies when you’re spotted? Affirmative. It’s just not as creative as the other two, which fused the game’s themes into a personified death machine.

Linearity: Bioshock Infinite isn’t exactly sprawling, but does provide more than a few nooks and crannies to poke your head around in.

Pro: There are hundreds of collectible objects and cleverly hidden upgrades if you search hard enough, giving the “I spy with my little eye” voice in our heads the perfect outlet for exploration.

Con: The game is just too linear for its own good at times. The feeling of generic corridor shooter sinks in every so often, which is upsetting for a game hellbent on being unique.

Well, there you have it. A list of all that Bioshock Infinite does right, and a completely opposite list of its biggest blunders. I will make two final statements for those of you who still don’t know whether they want to invest in the game; one for the artsy gamers (all six of you) and one for the COD gamers (all six million of you).

Artsy Gamers: Bioshock Infinite will disappoint you. It stops dealing with complex and deep concepts very early on, and turns into just another shooter just as things are starting to get good. That, coupled with the fact that anyone with an IQ north of 125 could predict the ending a mile away, is what compels me to tell you to steer clear of Infinite. Just go watch the first sixty minutes on Youtube and you’ll experience the best parts of the whole game.

COD Gamers: You’ll think this game is extremely deep and sophisticated, just like the Junie B. Jones books you read before bedtime. You’ll love its fast-paced action and Elizabeth’s “girl in the kitchen” mentality, and the ending will leave you stumped for longer than your failing report card did. So go tell your mom to pick this up for you, pronto.

4 thoughts on “Review of Bioshock Infinite for Xbox 360”