If there’s one thing that can convince me to re-buy Microsoft’s motion controlled peripheral Kinect, it’s the promise of a fully-fleshed out Avengers game. I’m proud to announce that Ubisoft succeeded in this endeavor, and if you were on the fence about getting a Kinect and/or Avengers B4E, it’s definitely worth the investment. 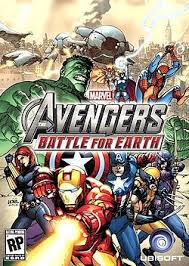 After my relatively fun time with Injustice and the DC universe, I decided to see what Marvel had in store for my fighting game itch. In return, I got a fighting game package that housed as much content as Injustice, just forgoing the superfluous S.T.A.R. missions and instead providing a wide assortment of interesting challenges with subtle modifiers. The other modes such as arcade and story all provided equally meaningful content to the game, all of which was twice as fun in B4E’s fantastic co-op.

The story mode has a pretty interesting story that doesn’t feel like a bunch of superhero multiverse cliches (… Injustice), but instead makes use of Marvel’s villains to provide a serviceable and relevant comic book plotline that you can actually get swept up in. It all begins when the Skrulls begin using their morphing powers to impersonate earth’s favorite heroes, which means the Avengers need to put these imposters in their place. Like I said, serviceable and perfect for the source material.

Once you get through the fourty one fights in story mode, there’s still a large amount of content to explore. The challenges and character missions are a blast, either helping you to explore a character’s move set or take on increasingly difficult modifiers to hone your battle skills. They feel nothing like a tutorial, however, and fit the game’s short-but-intense fighting mentality. Lastly, there’s arcade, a relatively standard fighting game component that pits your team of characters against increasingly difficult teams of AI. The challenge increases at a good pace, never leaving you blown away by enemies’ sudden ability to pummel you to pieces.

While all of that provides a hefty single player experience, the multiplayer adds a whole new dimension to an already superb amount of content. Campaign and arcade can be played in glorious co-op, and the Kinect tracks two people simultaneously surprisingly well. On top of that, there are offline and online competitive matches, and they’re both fantastic. Offline competitive fighting provides the same level of precision motion-tracking and fun as any other offline multiplayer mode, and online I encountered no lag whatsoever. Actually finding a match took a little bit of time (two or three minutes), but that’s to be expected with any Kinect game with online multiplayer. As an added incentive to play online, there are even player cards and collectable titles you can use to represent yourself online, and while it may seem standard for most fighters, it was a really nice touch in a Kinect fighter which most would wrongly assume to have less depth.

Being a Kinect only game, none of this content would amount to scratch if the controls weren’t solid. Luckily, the actual controls and the tracking of movements are both superb, easily the best I’ve encountered on the Kinect to date. All of the moves feel authentic to their character, such as holding your hands up high and raising one leg to have Spider-Man sling into and then kick an opponent, or open your arms and then slam them shut to have Hulk chuck a slab of rock at an enemy. All of the motions tie together perfectly for combos and juggles, providing a combat experience with depth and strategy. The dodging mechanic is especially well incorporated, being a simple shoulder lean to the left or the right to dodge incoming attacks. It’s fluid, fast and fun, simple as that. I occasionally ran into some weird screen freezes (about four times over the course of my play time) and the occasional framerate drop, but these were isolated enough that it didn’t rupture the experience.

Pros:
-Cohesive story with nice comic-book presentation
-Huge roster of 20 characters from all over the Marvel universe, ranging from Iron Man to Super Skrull
-Lots of meaty content, modes and unlockables
-Phenomenal co-op component
-Graphics don’t try to be gritty and realistic, instead having a nice, colorful and comic-y HD approach
-Controls and motion tracking are the best currently available with Kinect
-Online matches are a lag free and sensational full-body experience

Cons:
-A few graphical hiccups and crashes
-Matchmaking can take a while

On a sheer basis of good-to-bad, Avengers: Battle for Earth succeeds in being a great game. It has enough content to actually warrant a full-price purchase (I haven’t said that for a game in months), and allows for the best co-op Kinect experience you’ll ever have. Even without a dedicated tag team partner, Battle for Earth is still the best game in Kinect’s library and is worth checking out whether you’re a fan of Marvel or just want a fun, adrenaline-fueled and action-packed time.