Those of us willing to shell out some extra cash for IMAX 3D got the pleasure of seeing the new Star Trek not only early, but with the added bonus of one BAD-ASS poster only given to people who attended. While those two things justified the IMAX 3D price tag easily, everyone else not receiving that might be a little hesitant to spend their hard-earned money on cinematic gimmicks, or even on the movie itself. While the caution for IMAX 3D is justified, seeing Star Trek: Into Darkness in regular 2D is mandatory for any self-respecting movie goer. 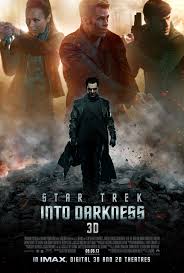 The trailers divulge little to no plot, so neither shall I. Just know that Chris Pine and Zachary Quinto team up as James T. Kirk and Spock once again, this time to face off against Benedict Cumberbatch, a man of many faces. The rest of the crew is present as well including Scotty (Simon Pegg) and Bones (Karl Urban), and while all the characters are familiar, the movie explores new fronts with each. Without going into spoilers (which would be anything beyond the already vague plot description), Kirk and Spock’s relationship really evolves, and the childish quarrels of the last Star Trek have turned into ethical and brotherly ones that really show how much good character development can do to benefit a movie and get viewers invested. Characters aside, the plot is strong and well paced. The only issues for some viewers might be the substantial lack of giant set pieces and firefights. There are a few HUGE moments, but every one of them can be found in the trailers. Because of this, the plot feels like that of a TV series’ season finale, not quite a huge summer blockbuster. Even though it lacks a certain “oomph”, it’s neatly woven and well written so the lack of a massive scale can be overlooked.

Everyone gives an A+ performance, and I mean every single actor. No a single soul left me feeling empty or cheated. Even the eye-candy of Into Darkness, Alice Eve, provided a good performance that was more than any of us in the theatre (I assume) were expecting. Chris Pine and Zachary Quinto have really hit the apex of their relationship in this movie, and have a very natural and organic on-screen chemistry throughout. Benedict Cumberbatch is amazing as always, but I’m pretty sure that’s not a surprise to most people. He really nailed the “evil incarnate” theme; being the first truly evil and emotionally upsetting villain I’ve seen in a while, if not ever. He rivals Vaas and Hoyt from Far Cry 3, for God’s sake.

As far as special effects go, they were good and flashy as ever. Speaking of flashy, J.J. Abrams didn’t lose the lense flares, in case you all were curious. They’re still in affect to the utmost degree, and I feel like it’s Abrams’ special signature on the Star Trek franchise. It’s growing on me.

As far as the IMAX goes, it’s only good for the handful of scenes where the Enterprise is roaring across the screen, but you could simulate that experience by standing outside of an airport, so it doesn’t really justify the extra movie cash. The 3D is good for post-conversion standards, but the first ten minutes of film are the only times 3D is ever implemented correctly, so that’s not worth the extra dough either. Honestly, like most movies, regular 2D is the way it should be experienced.

If you want a tightly knit story, good fan service to Star Trek fans and a hell of a lot of superb actors all holding phasers, this is the movie for you. It’s the kind of film you won’t remember much about a week after, but you’ll still feel distinctly better for having seen it.

One thought on “Review of “Star Trek: Into Darkness” IMAX 3D Fan Sneaks”