When Ubisoft sends its games out on PC, it knows better than to let there be visual parity between the master race’s version and that of the console peasants. In all seriousness though, it has been proven by file diggers that Ubisoft DID in fact dumb down the PC version to ease PS4 users’ inevitable tears lest there be any difference in visual quality between the two. Luckily though, those same file diggers are managing to bring back what made Watch_Dogs at 2012’s E3 conference so visually great. 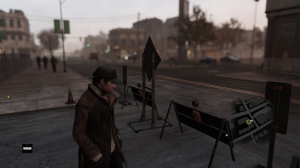 Click here to be taken to the mod, and save your version of Watch_Dogs on the PC from being anything less than all it can be. I know I’m a little late on reporting this, but every time I boot up the game, this mod just stands out as the reason to keep coming back.

One thought on “How to Make Watch_Dogs Presentable”