While I never did a proper review of Far Cry 3, I did in fact play it from start to finish. The reason I never wrote a formal analysis of its positives and negatives was that the majority of the game cozily resided in that “it’s fine, it’s alright” category alongside other unremarkable shooters. But now, as I reminisce upon gaming’s brighter moments in recent memory, the third Far Cry installment keeps coming to mind. At this point, I think I’ve successfully narrowed it down to two core reasons, two aspects that make FC3 stand out as one of the best games ever made; the quintessential “Shawshank Redemption” of the medium. 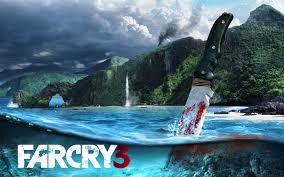 One aspect is in the characterization. The main characters, namely Jason and Vaas, do not follow the tropes of regular survivor character arcs. They both end up as characters who enjoy killing, the blood lust, the insanity of it all. The player’s character, Jason, is not the kind of character the player can relate to. He starts off spoiled college kid, and ends as a serial killer who realizes he’ll never fit in with society again, but accepts that fact. His distance from our warped perception of redemption makes him that much more intriguing as a character. Vaas falls into the same category, but as more of a reflection for Jason to parallel himself with. Vaas shows what could become of Jason if he forgets to temper himself, as Vaas is the violent sociopath with no grasp on regulation that Jason is slowly evolving into. Not to mention Vaas is an exceptionally well-written character, featuring monologues so memorable that they’ve spawned some of the greatest memes in gaming history.

The other aspect that really separates this game from the rest, in my opinion, is the soundtrack. While I have favorite video game soundtracks, such as Remember Me‘s, Far Cry 3 just takes things to an entirely new level. It literally translates the theme of surviving against all odds into tracks of music, whether it be through Jason’s drug-induced reserved dubstep beats or the beautiful main theme used for Jason’s final speech regarding his reflection on what he’s become. While I’m not a fan of Brian Tyler, he’s certainly not bad at what he does, as can be seen in Iron Man 3. But this, in my opinion, will forever be the highlight of his career. His other soundtracks play it safe in that “heroic and bombastic” sort of way, whereas this soundtrack enraptures itself in the idea that the jungle is a place of foreboding and mystery.

I can sadly say that given Ubisoft’s track record, I highly doubt the developers even understand what made Far Cry 3 special and that Far Cry 4 will be nowhere near as consummate as its predecessor.  Let’s hope they prove me wrong.

One thought on “Far Cry 3: More Than Meets the Eye”