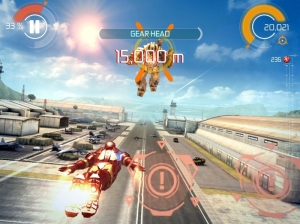 Having received an iPad against my will for the purpose of work, naturally my first instinct would be to start playing all of the stupid iOS games I’d never had the opportunity to play before. If I was forced to house an Apple product in my previously pure home, I’d make good use of it damnit!

I kicked off with downloading Batman Arkham Origins, Sonic Jump Fever, Sonic & All-Stars Racing Transformed and Iron Man 3. The other three games aren’t really good enough or notable enough to even do a write up on, so here is my review of the one that didn’t justify my hatred for mobile gamers.

Iron Man 3: The Official Game’s story picks up right after the movie with a fun plot that finally allows me to face my favorite Marvel villain of all time: The Living Laser. In all seriousness, it’s a cute story told completely through dialogue exposition and none of the villains are anything to gawk at, but the final plot twist is actually pretty cool (“better than the goddamned movie’s twist at least” *angry fans rabbling*). But this is an iOS game, so you’re not here for the story. You’re here to find out if it’s worth mindlessly playing while you take a dump.

Featuring about half of Iron Man 3’s forty-two different Iron Man suits, there is enough fan service here to keep the most dedicated Iron Man nerds happy, such as myself. Being a free-to-play game, however, only about a third of these suits come cheaply, while another third can be unlocked through dedication, and the final third require five human sacrifices and an Illuminati membership card to gain access to. Or, you know, you could just buy them with real money. Pfffffft. In short, some of the coolest suits are cheap and only take a few hours to unlock, such as the briefcase suit from Iron Man 2 or the Mk25 “Thumper” suit from Iron Man 3. But then there are the ones that require either real world money to unlock or more play time than any sane person should invest in a f*cking phone game, like the Iron Patriot armor or the Suborbital Suit. In short, once you get to the Mk 32 Romeo or Mk40 Shotgun armors, your days of progression are pretty much over. 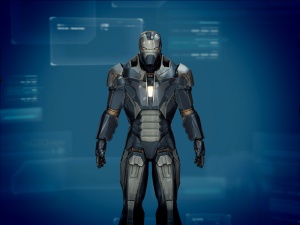 The actual game play is pretty fun, consisting of you flying forward extremely fast as obstacles and enemies come towards you, which you either need to dodge or take down with your repulsor beams. The level continuously generates “new” areas by reusing the same patterns every five or six cycles, meaning that you’ll eventually learn everything that could possibly come at you. But some things can still fuck you over no matter how good you think you are, such as those horrible rockets. Oh, those horrible, horrible rockets. But what’s more scary than the rockets is the fact that I, a “hardcore” gamer, found myself having more fun flying as Iron Man on a crappy little iPad than I’ve had playing any other game this year. Seriously, I would choose this over Watch_Dogs.

So, in conclusion, this game effectively marked the day I realized Triple A gaming had gone stale and all those insufferable PR guys claiming that “mobile is the future” were actually right. If I’m more addicted to playing a godamn endless-flyer than I am to busting out my gaming PC for some hardcore Battlefield 4, then something is seriously wrong with this industry.

But really, play the Iron Man 3 game. It has fun suits and junk.