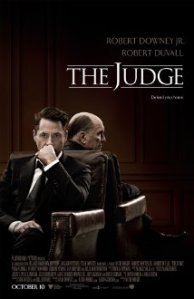 Robert Downey Jr. and Robert Duvall have created one of the weightiest films in recent memory with The Judge. If your family is anything less than absolutely perfect, then you’ll find something to connect with. I can’t really describe the characters too much as almost anything could be classified as a spoiler, but in short, Downey Jr.’s character Hank Palmer has a family that is far from perfect. Some of this is his fault, some of it isn’t, but it all results in him and his father, Joseph Palmer, having one of the coldest father-son relationships ever.

While this movie does a great job of conveying the imperfect father-son relationship struggle that so many people live with, the bigger theme really seems to be how valuable it is to have a parental figure to love. It could be a father or a mother, an aunt or an uncle, or even a grandparent. And how, without that, there is a root conflict between parent and child so great that no circumstance whatsoever can build a bridge over it. That’s the true brilliance of this movie, that almost any imaginable major family dysfunction is addressed and spoken for, meaning most people can find a character or role in the film to align themselves with.

Outside of the genius of the plot, the acting is superb. I refuse to say Oscar-worthy as the Oscars have repeatedly let me down and thus I cannot hold them as a decent bar to compare great acting to, but if I were to hold that title in high regard, both Duvall and Downey Jr. would be on their ways to winning best supporting and best lead male actors, respectively. This movie is heavy, extremely heavy, and every single performance conveys that. There was one scene in this movie which was so tense that I was literally biting my thumb for about three solid minutes, something I’ve never done before. And there were some scenes so pitiable that I was on the verge of tears. There were scenes of every flavor throughout the two hour twenty minute movie, and every one of them was near godamn perfect. Even the Vera Farmiga scenes, which a few reviewers cited as unnecessary, felt like they carried themselves perfectly alongside the main story thread and fit in well. While some reviews claim The Judge is overly long, I cannot fathom more than a few minutes overall being shaved off without seriously compromising the beauty of the film.

The only real thing I could critique about this movie is that occasionally the dialogue gets a bit cheesy. I mean, there was one instance where a character actually said “is that corny?”. When your own characters are asking that question, it’s a good indication that it doesn’t belong in this kind of film in the first place. Aside from that, the movie as a whole is masterfully done.

This is a film that everyone can pour their souls into and get swept up in. Whether you have family troubles, want art-house emotions without art-house film making, like first-class family dramas or just want to see Downey Jr. play something other than Iron Man, The Judge has something for you. And in that sense, while it’s not a “go out right this second and buy a ticket” type of film, it’s definitely required viewing for anyone craving some substantial cinematography in this rather lighthearted movie year of 2014.

2 thoughts on “Review of “The Judge””