Big Hero 6 is coming from the guys who made Wreck-It Ralph (and that one ice-chick movie…), so expectations were astronomical for them. Not to mention it’s Disney’s first usage of their Marvel licenses for an animated movie, so this might very well set the precedent for future animated comic book superhero movies if it does well. And, in short, it’s a good movie. Great movie, even. But it’s a movie with major missed opportunities. 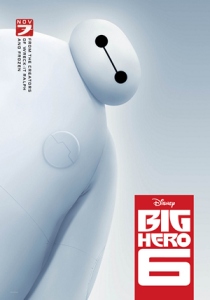 Big Hero 6 stars a boy named Hiro and his older brother’s big, inflatable robot nurse named Baymax. There’s a bigger cast of characters here, but those are the two noteworthy ones. All the voice acting is great, as is par for Disney course, and- actually, can we just get to the part where I discuss how this could’ve been a lot better than the “instant-classic Disney animated movie”? Alright.

Well, the movie has built itself up to the crux of the regular animated Disney movie, where the protagonist is about to do something bad that would potentially tarnish his flawless hero reputation. In this instance, it’s Hiro, who’s unmasked the bad guy as being Dr. Callaghan, the man responsible for Hiro’s older brother dying in a fire. Well, when Hiro sees this, he asks Callaghan why he did it, and how is brother went in to the burning building trying to SAVE the doctor. Callaghan replies coolly with “that was his mistake”. And at that point Hiro decides to rip out Baymax’s safety protocols which forces Baymax to rely on his killer-robot chip, effectively turning him into a terminator against his good-natured programming. And the music gets sad as you can see all of Hiro’s friends desperately trying to stop Baymax from brutally murdering a crawling Callaghan, while Hiro is enraged and shouting for Baymax to kill him. I mean, it’s amazing, you never see a Disney protagonist actually deliberately try to kill the villain.

But then what happens? Well, Hiro’s friends manage to turn off Baymax and make sure Hiro’s moral compass gets reset, of course. Because Disney-forbid that a hero ever succumb to darker emotions. Here’s how I wish it had gone down: Baymax actually DOES kill Callaghan, and then Hiro realizes what he’s just done. Then, instead of the generic ending thirty minutes later where the bad guy gets arrested and everything ties up super nicely, we could’ve had the last thirty minutes be Hiro’s friends helping Hiro redeem himself, and the final shot could’ve been the same as the one we got, with Big Hero 6 being formed. I mean, if they’d chosen to go down that darker path we’d have had one of the most surprising and potentially well-done narrative curve balls in the history of animated movies. Instead, we have the trademark plays-it-safe animated movie that Disney’s known for.

While that didn’t ruin the movie for me by any means, it did ruin the “Jesus Christ did we just watch that??” factor that the movie was so beautifully setting up.

Big Hero 6 does a lot of stuff very well, however. A great cast of lovable characters, a REALLY cool villain (in terms of powers and appearance, not so much his identity), a solid enough plot, an amazing soundtrack and some of the best animation I’ve ever seen. Seriously speaking, some of the visuals in this movie (specifically the animated trees/grass/other foliage) look better than ANY of the CGI in Transformers: Age of Extinction. You know you’re doing something right when your animated movie’s visuals look better than those of a $210 million budget live-action movie.

To wrap it up, here’s a list of pros and cons for those of you who did a too long; didn’t read at the stuff above.

Pros:
-Great animated adventure, Disney knocks it out of the park again
-Great characters
-Great voice acting
-Menacing villain with cool appearance and powers
-Fantastic soundtrack (between Henry Jackman’s score and Fall Out Boy’s single “Immortals” it was one of the best soundtracks of the year)
-Best animated visuals and effects I’ve ever seen
-Had one of the best moments I’ve ever seen in an animated movie, exploring some of the darkest stuff there is to explore

Cons:
-They absolutely ruined the aforementioned amazing moment with a Disney cliche` resolution and wrap-up

Overall, of course you should go see Big Hero 6. But don’t get your hopes up for it to completely break the mold of Disney’s animated movies, as it only goes against the grain for so long before snapping back into place in generic Disney fashion.

One thought on “Review of “Big Hero 6” (Spoiler Review)”