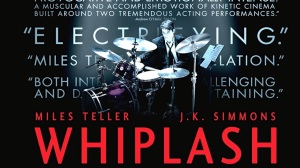 It just ticks off all the boxes in terms of what makes a movie “good”. Protagonist who you want to see succeed, intense antagonist that’s not completely one-dimensional, real life issues as backdrop for the movie’s conflict, and a cozy ending with a cherry on top.

What I’m trying to say is, it’s nowhere near as profound as some people are making it out to be. I went into it with sky-high expectations, but, honestly, I thought about the movie afterwards for about the same duration that I reminisced over Blackhat, to give you an image of how memorable it is. It’s not overrated, per-say, such as Birdman was; it’s just not the best movie of the decade that some people are claiming it to be.

J.K. Simmons is amazing, but he has the easy job. It’s his typecast role that he does in everything else (Spider-Man, Oz, etc.). Miles Teller isn’t as amazing but definitely does the much more impressive job tackling his complex and conceited drumming prodigy character.

In terms of music, if you like jazz or even just drumming, you have to see this.

In terms of highbrow, slightly “artsy” films (also known as Sony Picture Classics, in this case), I am just not feeling Whiplash nearly as much as I felt Foxcatcher. But still, it’s a boatload better than that shitfest Birdman. One minor gripe I have is the absurd dramatization this movie contains. Seriously, Oliver Stone’s Savages didn’t contain the sheer quantity of blood, sweat and tears Whiplash has. I’m not even kidding. Every time you see Miles Teller going hard in the movie, he looks like he just got the big Splash Lagoon bucket dumped on him, and he loses at least six pints of blood throughout the film. And he cries a lot.

Go see it if you are in need of a good film. Not a game changer, nothing spectacular, but definitely good. Although, there is a certain irony that a movie all about striving to be unanimously better than the rest never truly rises above “good”.

2 thoughts on “Review of “Whiplash””