Neill Blomkamp is my main man when it comes to sci-fi, these days. I really liked both District 9 and Elysium, and Chappie is no different. Since he’s made more than one short film about sentient robots in his time, it’s nice to finally see his long-running idea turn into a full-fledged blockbuster. That’s not to say that it doesn’t suffer from quite a few problems, but overall it’s still an arguably great movie with a lot of thought put into it. 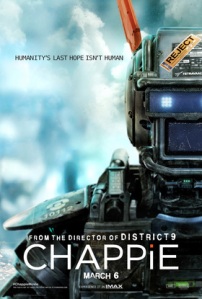 What I liked: the film doesn’t go the boring route. Chappie could easily have chosen to be the cliche “robot with a heart gets bullied by a society that just doesn’t understand him” route, but instead it chooses to ask what our response would be if said sentient robot decided to align itself with the wrong side of humanity, such as the drug traffickers and murderers. Blomkamp also manages to incorporate the ever-popular sci-fi debate of whether or not it is safe for robots to take the place of regular police officers, when it comes to making the tough calls in life or death situations. In other words, this is far more than your typical Iron Giant type of story, this is a whole ‘nother level of Hollywood social commentary. It’s not revolutionary or anything, but it does manage to successfully communicate the hard questions that most of us would rather ignore.

The issues with the film are few, with the biggest one (in my eyes) being pacing. The first act is great, yet the second and third acts could’ve used some trimming. It’s understandable that Blomkamp wants to exceed that two hour mark and maintain his uncut vision, which I respect, but there are some minor exposition moments that could’ve gone without saying, which would’ve left the movie shorter, tighter and a tad bit more effective. Specifically the ending, which I would’ve liked to end about ten minutes before it did. The movie follows through to its logical conclusion, but I feel like if they’d left a bit more up to the viewer’s imagination and hadn’t tied up every single dangling plot thread I would’ve actually left more satisfied.

The score by Hans Zimmer is awesome, as always (even if he’s getting a bit by the numbers at this point), and the supplementary Die Antwoord tracks are solid enough. Speaking of Die Antwoord, the band who’s members are the leads of this movie, their acting skills are actually pretty solid! Nothing to write home about, but far better than what some are saying. Especially Yolandi, who manages to be an endearing mother to a child-minded police robot. That’s one heck of a role to kick off your acting career with. And even if we never see them again in a movie, they deserve to be commended for this and I like that Blomkamp includes these South African talents into his movies, it spices up the usual Hollywood soup. It goes without saying that Sharlto Copley was kick-ass as Chappie. Hugh Jackman was really good as well, and, in fact, the only actor who seemed to be phoning it in was Sigourney Weaver, who was probably only there so Blomkamp could establish a working relationship for Alien 3.

Overall, if there is still a theatre showing Chappie near you, I implore you to see it. It’s way better than critics would have you believe, and just because it doesn’t adhere to the same tired old story the trailers advertise it as, doesn’t mean it’s bad. It’s different, and uniquely endearing, just like Chappie himself.

One thought on “Review of “Chappie””