Having just re-watched Man of Steel, I have to say, it has aged SUPERBLY. These past two years, filled with nothing but Marvel-this and Marvel-that, have kind of desensitized me to the notion of a superhero movie actually having stakes. Thankfully, after my re-visitation of Man of Steel, I now remember why we need heroes in the first place. 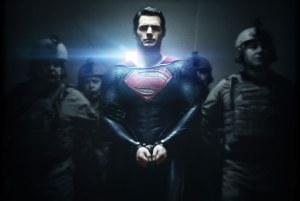 Marvel movies range from great fun to shitty. Captain America: TWS and Iron Man 1 fall into the former, while Age of Ultron claims the latter title like it’s a trophy. But, regardless of their individual merits and pitfalls, the one overarching issue is that the stakes are never high in any of them. Ever. Mainly because A.) they’re Marvel and don’t want to go dark, and B.) they need to keep everyone happy and healthy for the MCU inter-connectivity to be sustained. And that means that none of the movies can ever reach the title of “epic”, since they all cap out at the aforementioned “great fun” due to their low stakes. Man of Steel, however, was epic. When I first watched it I was still a bit blinded by Marvel’s unprecedented success, so I couldn’t give it a fair shake. After Age of Ultron, well, those blinders were GONE. So, with the advent of my second viewing of MoS, I have to say, it’s a stellar movie. The villain is SPECTACULAR, and even for his miscasting, Michael Shannon still does a fantastic job. More importantly, though, he’s written so that he actually gets shit done. Particularly, that scene with the world engine sucking up people in Metropolis, then slamming them into the earth (effectively mushing their bodies to microscopic pieces) was borderline cringe-inducing, and that’s a good thing. When the villain in a movie actively makes you go “dude, stop, pleaseeee” instead of “Hey, guys, can we let James Spader win a round or something?” you know the writers are doing something right.

I just don’t want to watch another Marvel film, because I can already tell the plot before even having watched the movie. That’s not to say I won’t go and see them, but it definitely won’t be at full-ticket price anymore, and not in the first week of release either. DC has proven that they’re willing to take risks, however, and with shit like Age of Ultron coming out of the opponent’s camp, I think they’ll find that more people are receptive to their gambits now. With that said, DC, please don’t let your own DCU stumble into the same pitfalls that the MCU is currently entrenched in. While Batman V Superman‘s trailer definitely looks like it will continue off Man of Steel‘s strength, don’t sacrifice high-stakes conflict solely for a Justice League jamboree.