“Oh what a day. What a lovely day!” That’s one of Nux’s quotes in the movie, and it’s also how you’ll feel after exiting the theatre. 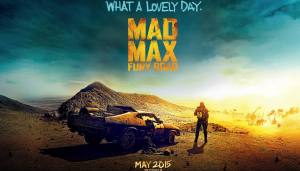 Mad Max: Fury Road is an hour and a half car chase with an extra half hour of character interaction tossed in there for sake of story. But even with such an emphasis on high-octane action, I actually found myself caring about the characters more in Fury Road than any other movie this year, even though they all had the least development. It was amazing. I went from looking at Nux as nothing more than a crazy asshole to eventually learning to love him for what he was. And Max, well, he’s a side character in his own movie, but with only about thirty words of dialogue over the course of two hours, you can’t help but love him. As always, Charlize Theron is pro, not much to say there. And Rosie Huntington-Whiteley is in this too, surprisingly. Remember her? From Transformers: Dark of the Moon? No? Well, okay, point is she was good here.

The action is wonderful. There was a relatively tame action sequence (when compared to the others in this movie) about a third of the way into the film involving a squad of motorcycles, and it’s just about the coolest thing ever. I mean, the way the sand looks in the midst of all this fighting and driving is just so bad-ass, it’s like oceans of orange dirt spiraling out of control around off-road vehicular death-derbies.

Then there’s another sequence, during the big finale (super minor spoiler, barely even qualifies as one) where Max gets an arrow shot through his hand, and he just slams it against the side of his car door, effectively pushing the arrow out. While that might seem small, it’s something I’ve always wanted to see done in a movie (curious that it’s taken this long), and it just looked so bad-ass. That pretty much sums up all of Fury Road.

While the stuff I’m gushing over might seem relatively small-scale, fear not, the movie has TONS of larger action. I just liked the smaller, more tight sequences. But the bits with the storm and the pole-vaulters (teased in trailers) are amazing scenes as well.

In short, Mad Max: Fury Road is growing on me with every passing second. It’s definitely my second favorite movie of the year, maybe even starting to encroach on that prized first-place spot. Needless to say, it is a MUST SEE. Do not let this one leave you in the dust.