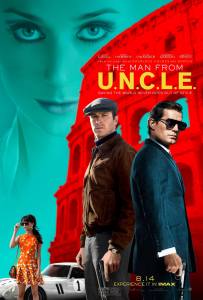 After a long hiatus (I haven’t personally seen him do anything since the second Sherlock Holmes), Guy Ritchie is back with the much needed style-burst flick I’ve been craving all summer. None of the “just clean enough to be family friendly” fun of Ant-Man, nor the staple series standard serving size of Mission Impossible: Rogue Nation. Just plain ‘ol Ritchie making a ritzy, classy-as-fuck Cold War spy movie that goes exactly like you think it will, managing to impress even though you know all the beats before they happen.

Where to start… it’s funny. Not Marvel funny, where it’s overt and in your face. Very clever dialogue and some beautifully dry humor (one particular scene where Henry Cavill is eating a sandwich in a truck is just the most absurdly funny thing) are all that U.N.C.L.E. relies on, and it works.

The character balance between Armie Hammer and Henry Cavill’s relationship is an odd one, as the dynamic I was expecting didn’t really exist until the end. Up until the final scene, you just feel REALLY bad for Hammer’s tortured Russian character Illya Kuryakin, rather than viewing him as a fun, evenly matched rival to Cavill’s suave American operator Napoleon Solo. But, even though the leads all act like massive assholes to each other (besides Illya, who sadly has to just sit around and take it like an abused puppy), it actually works and the necessary chemistry is there.

That last sentiment sums up the whole movie pretty aptly: somehow, it all works. None of it should, on paper. Guy Ritchie’s trademark style over substance coupled with a Cold War story we all know, overdone character dynamics accompanied by unorthodox unequal rivalry distribution; none of it should fit together. Yet somehow it all does. And I almost feel bad for supporting the popular opinion that Ritchie relies solely on style because he really doesn’t. His movies might have more of it than other directors’, sure, but that’s just an extra ace up the sleeve rather than his only playing card.

On a side note, Ritchie’s included a classy ‘ol cringe torture scene in this one just like he did in Sherlock Holmes: A Game of Shadows. So yeah, understand that not only are there gasps, giggles and guffaws, there’s also a bit of gagging in U.N.C.L.E. But as with everything else in the movie, it works.

Update (8/24/15) It’s a day later and I’ve been listening to the soundtrack on auto-loop. It’s fantastic. Daniel Pemberton is the MAN. This movie as a whole is like a rich wine, aging and gaining favor in my mind with each day I let it sit.