In a world dominated by piss-poor Battlefront reboots and multiplayer exclusive Titanfall template knock-offs, there exists Rainbow Six Siege, a game that admittedly falls victim to both of the aforementioned titles’ most damning symptoms: not a lot of content, and no single player experience worth a damn. And yet, even with those drawbacks in mind, I’d still highly recommend you go out and get it… on a few conditions. Read on and let’s see if Rainbow Six Siege is right for you. 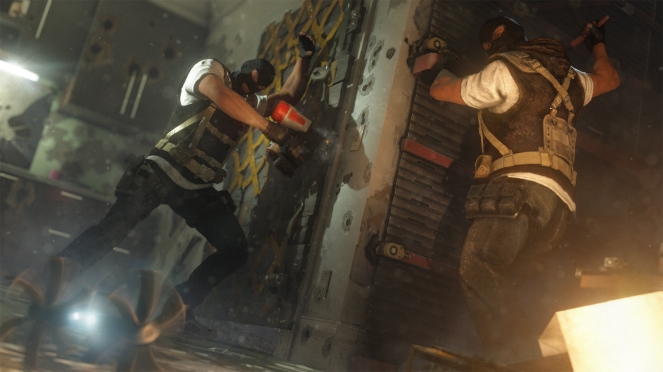 Siege‘s biggest selling factor is its gameplay, plain and simple. It’s the twitchy, thinking man’s Call of Duty, requiring even sharper reflexes than the aforementioned title while also demanding a level of planning beforehand. No matter how fast your trigger finger might be, an opponent who’s booby-trapped the ceiling, doorways and floors and is hunkered down behind layers of wall reinforcements will always be faster. As such, you can’t just be smart, and you can’t just be fast to win. You have to be both. Virtually every room in all of Siege‘s maps are six-sided kill boxes, since anyone can attack from anywhere. If the ceiling is wooden, expect enemies to be shooting through it, past the steel reinforcement beams directly on top of you. Similarly, they can do the same to the floor. From the sides, they can nitro-charge and breach down entire stretches of wall, taking away any obstacles between you and them. Windows only remain solid for the first minute of any given match, and any area that looks like a usable line of sight IS a line of sight. Ubisoft has substantially upped the amount of destructibility since the initial alpha (actual improvements since an Ubisoft alpha?! Whaaaat?!), so if that initial test-drive didn’t rope you in, keep in mind that the final product IS slightly closer to the original E3 showing’s vision of the game.

With that in mind, you might be wondering how anyone manages to stay alive if there’s this many available ways to get the drop on your opponent. The answer is simple: no one stays alive. There is another answer, team coordination, but that one is a rarity so I’ll focus on the first answer for now. Out of the dozen hours or so I’ve played online so far, most of my matches have actually come down to 1v1 face-offs from the initial 5v5 the match started with. I kid you not, it gets that close on a consistent basis. For that reason, the game is TENSE. The walls have eyes and so does everything else, so no matter how vigilantly you’re surveying the area, odds are that you’ll suffer at least one kill in every match where you go “HOW THE F*%& DID I DIE?!” since the kill-cam will show an enemy doing something totally irrelevant to your death. But that’s the glory of it: at a point, you actually will get good enough to discover why you died, and why it’s so crafty that the kill-cam couldn’t accurately capture it. And then you’ll get good enough to pull off those kinds of maneuvers yourself. It’s frustrating as hell, but insanely fun. Not to mention the nail-biting agony when only a single friendly is left in a house running rampant with three or more opponents; watching those moments can get the heart pumping like nothing else.

Teamwork and coordination are a nice bonus, but they won’t save you. I’ve been on some of the tightest, most coordinated teams and sure, we’ve pulled off winstreaks like no one’s business. But then again, I’ve been on silent, uncoordinated teams that pulled off the exact same feat. Basically, it’s entirely a matter of luck as to whether your group of five will have the cohesion to match the other group of five. Factor in what map and rooms specifically you’ll be fighting in, who picked what operator, etc. and there’s way too many factors to EVER assume that just because you have a mic and some friends you’ll win a match. If you’re in Hereford Base and have a good Kapkan on your team, you all could literally sit in the corner sucking your thumb while he ran the show. Just one example of how the right tactical choices negate the importance of teamwork. Though, I will say that certain coordinated maneuvers can be sick, like when your teammates drone inside the building, map the enemies’ locations, detonate breaching charges on the opposite side you’re actually coming from, then catch the entire enemy squad with their pants down. Those moments are special and reserved fairly exclusively for team play.

That’s the gameplay. One hit usually means death, and since you’re only allowed one death per round, well, expect to do a lot of waiting if you’re not good. It’s painful to learn but fun to conquer, and is the same kind of rewarding experience as that one-death only mode from Ghost Recon Future Soldier‘s multiplayer. There’s a plethora of different operators to choose from, each with their own guns, skill sets and abilities, so everyone will have a preference. In terms of content, the amount of choices you, the player, have is perfectly adequate. Now, let’s talk about map count since people like to get angry over this (with good reason).

Let’s analyze Battlefront‘s map count: 12 maps, but only four of them are relevant since only four allow you to play the two main modes of the game. So, essentially, four maps. Rainbow Six Siege has 10 maps, with four DLC ones coming FOR FREE over the course of the new year. Further, let’s look at the level of detail in each of the 10 Siege maps: Most have two to four layers with insane depth, acting as carefully constructed wedding cakes with level upon level that impact the ones above and below them, meaning every single floor has to act in tandem with its neighboring ones. And since you’ll really only be focusing on half the map for any given objective, the other half will always feel refreshing. As such, while 10 is a small number on the surface, when you consider how much goes into every single map’s experience, that map count feels a LOT bigger, I mean it. I’m NOT an Ubisoft apologist, as most know, so when I say they’re actually in the right on something, it’s coming from my gut, not some misplaced sense of soulless publisher loyalty.

Now, while I’m perfectly fine with the 10 multiplayer maps being the heart and soul of the game’s content (along with Terrorist Hunt which is essentially a co-op version of multiplayer), there’s also a tacked on set of 11 single player missions. These are stupid. They feel like afterthought levels that blend the line between tutorials and actual meaningful missions, but don’t amount to anything. They’re restrictive and force you to go down certain avenues in each of the game’s maps, totally negating the biggest positive this game has going for it (“any path is a viable path”), and feature stupidly precise AI that will make your life a nightmare. It’s tedious, predetermined, anger-inducing garbage. So, screw Situations mode. It’s not enough to appease those wanting a single player portion and it’s not enough to serve as a decent distraction for people like me who prefer multiplayer.

We’re beginning to move into the negatives, so I might as well bring up the finicky squad system. It worked perfectly when I was inviting and joining random Uplayers’ games, but when I’d invite actual friends of mine to my squad or vise versa,  error after error would plague me and we’d barely be able to eek out a single successful realistic difficulty match of Terrorist Hunt before a server disconnect or random squad disband would occur. And it only happened with my actual friends. I went through two straight days of playing with non-real life Uplay friends, and only encountered a single server error (unrelated to the squad feature). Then, one night my friends finally get the game for PC and all of a sudden every Ubisoft error in the book crops up. Make of that what you will.

Another major downside for this game, one that I have no idea how any developer would ever fix, is that idiots are RAMPANT in this game. The community is great, and yet, there are still a few morons playing this like it’s Call of Duty. People will grenade the hostage and instantly lose the whole team the match, team kill without risk of punishment, and quit ranked matches leaving you one man down for the entirety of the experience, completely skewing your rank when you lose unfairly. Not to mention there’s the shit-talking of those with ten foot multiplayer sticks shoved up their asses, so yeah. If you’re not up to dealing with this kind of frustration on a semi-regular basis, run for the hills, as far away from Siege as you can.

In the end, Siege isn’t a game for most people. It’s got a downright embarrassing single player portion, Ubisoft’s trademark error-riddled signature plastered throughout, and can induce a LOT of frustration in the game’s core mode of multiplayer. Not to mention that the amount of content in this game is totally fine with me, but only because I got it for $20 BEFORE LAUNCH.

So who do I recommend Siege for? People who love Tom Clancy games and are willing to tolerate a little of Ubisoft’s regular online nonsense. And only then, when the potential purchaser in question goes to eBay and buys an Nvidia Bullets or Blades promo-code to get the entire game for half off (or more). Those are the conditions that made my purchase of Rainbow Six Siege entirely guilt free, and should work the same for you as well.