You want to know what a real impossible mission looks like? Topping Ghost Protocol. Still, don’t let that fact fool you: Rogue Nation is a damn good time, and arguably the best possible follow-up to MI4 that could’ve been reasonably expected. While it can’t quite top its predecessor, it damn near ties. 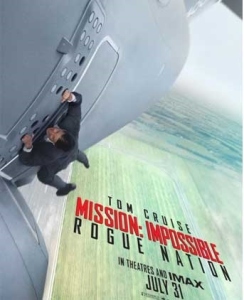 Issues are few and far in between, with the only glaring one (to me) being a reliance on a handful of obnoxiously noticeable plot conveniences for Ethan Hunt to move his adventure forward with. Some of these are actually explainable and justifiable, but some of them are expected to slide under the audience’s radar (which they evidently didn’t, as I’m currently complaining about them right now). The other major issue that’s not so much an issue as it is a subjective complaint is that none of the set-pieces in this movie had grandeur or build-up. All the scenes in the trailer are doled out within the first half of the movie, and while they’re all technically impressive, none quite match the verticality of the Dubai tower from MI4. Personally, a fight along a train would’ve been nice here in my opinion, so that this movie would have a set piece horizontally impressive to perpendicularly rival the previous movie’s standout scene. I’m not joking about that whole long vs. tall dynamic thing, by the way.

Otherwise, the movie is wonderful, if a little… familiar. I guess with spy movies it’s just hard to impress these days, as audiences have already seen most things (car vs motorcycles, motorcycles vs motorcycles, hand-to-hand combat, gun vs fist, fist vs fist, etc.) and Rogue Nation lacks anything utterly new like the Dubai climb from MI4. The plane scene from the trailers is as close as we get to something of that nature, and it’s plopped right into the beginning of the movie so there’s literally no build-up to such an early payoff. And, having watched this movie directly after Ant-Man (that review is coming soon) which had a very cool gimmick to its action scenes, Rogue Nation just felt a bit… subdued? I don’t know, I was just underwhelmed and tired by the time it finished. Still, I recognize it is a meritable flick and deserves the love it’s been getting. Go see it if you want something great to hold you off until Spectre.