If you liked the original, you’ll like Catalyst. After all, they’re more or less the same game.

For the uninitiated, Mirror’s Edge is a game about parkour. That’s code for speedy running, jumping, wall-running and flipping. The game is about getting from point A to B as smoothly, stylishly and efficiently as possible on your own two feet. It’s fun.

Now for those of you who’ve ever played a video game and know exactly what Mirror’s Edge is supposed to be, here’s the skinny: either you loved the original or hated it. If the latter, Catalyst won’t sway you. If the former, as I said above, you’ll be a happy camper. I know I was.

All the details beyond that you can find in other reviews, like how the combat is pretty great but still lacks the seamless flow of the Arkham games (something that could be remedied by adding an auto-target glide feature), or how the open world is linear to the point of being a non-feature. But the one thing no one has specified for inquiring minds is what I’m about to show visual evidence of:

The core story and all its side missions (you can see my unlocked achievements) clock in at 9 hours. And it’s honestly closer to 8 if you disregard the time I spent dicking around snagging irrelevant collectibles. Sure, there’s time trials and user generated content, but if you want actual scripted, meaningful missions then this game gives you 8 hours of them, no more or less. For $60 that’s a hell of a drop-off. Now, I paid $40 and given how much I loved those 8 hours (they were definitely quality over quantity), I’m totally content with my purchase. That may not apply to all of you, so if you want quantifiable bang for your buck, look elsewhere. Otherwise, it’s time to put on your running shoes.

On a totally irrelevant side note: the story’s chock full of forgettable characters, but there’s one that’s actually pretty great: Plastic. She’s a hoot. I hope she appears in the sequel, if there ever is one.

Before we get started here, if you haven’t already, watch Nightcrawler‘s trailer:

Now that you’ve done that, ask yourself the following questions:

Did you like what you saw?
Do you want to see Jake Gyllenhaal be a psychopath for two hours and secure himself an Oscar nomination?

If either of these items struck your interest, then I’d say the movie is worth a watch. For anyone who said no to the above two questions, wait until a DVD release or just ignore Nightcrawler all together.

I will give Nightcrawler massive props for being one of the first movies in recent memory to actually have trailers that accurately depict the film itself, rather than luring you in with false hope for a completely different product. That is the main reason the trailer is included above, because if you found anything in it to be within your range of cinematic tastes, then you will most likely have a great time with the full thing. Jake Gyllenhaal’s performance is killer, as was already mentioned. The car chase sequence from the trailer is even better in the full movie (it’s incredibly well shot, probably the best car chase I’ve ever seen), and actually feasible to boot. And that’s really the best aspect of the film: the feasibility of it all. It’s a movie with no role models, and all of the sick aspects of human nature within are so real that it’s unsettling. While the LAPD’s involvement (specifically the lack thereof) requires some suspension of disbelief, the movie as a whole is generally well written and does a good job accurately portraying the job of nightcrawling.

My last compliment for the movie will be for its score, which is really captivating. It’s upbeat in some deceptively fitting places, mainly to illustrate the detached and mentally ill nature of Lou Bloom, Gyllenhaal’s character, and in that respect it complements the character very well and subsequently earns its stars.

If I still gave number ratings, it would be hovering around a conservative 7.5 to a slightly more liberal 8, leaning more towards the latter only because I saw it later at night and was in the proper mood for it. So, to reiterate, if you liked the trailer then I can wholeheartedly recommend that you go out and see Nightcrawler in theatres while you still can.

In short, Bayonetta 2 might just be the finest beat-’em-up of all time. There are good ones, like Devil May Cry, there are great ones, like Anarchy Reigns, and then there are phenomenal ones such as Bayonetta 2. For those saying “not worth buying a Wii U for”, that’s either because you’re not a real beat-’em-up fan or because you weren’t going to buy it in the first place. For anyone with an inkling of interest in this game, know that your anticipation has been completely justified. 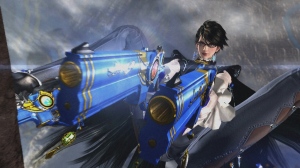 Bayonetta 2 signals the return of the titular witch from the original, this time accompanied by a Nintendo-sized budget. All of the original cast return, including sassy rival witch Jeanne and bad-ass bartender Rodin. Some new faces appear as well, but mentioning them would spoil important aspects of the story, so just expect some unexpected appearances. As far as voice acting and story-telling go, Bayonetta 2 is hit or miss. The voice acting is well done for characters such as Bayonetta and Jeanne, but on the other side of the fence you have characters such as Loki who provide some of the worst dialogue and performances in video game history. This falls on both the writers and the voice actors, and while it’s not that important for this kind of game, the lack of truly talented writing and acting do hinder the overall powerful narrative.

In terms of gameplay, if you loved the original Bayonetta or love button mashers in general, then this game has you covered. Not only does it improve upon the original, but it provides so many new weapons and gameplay-altering costumes that the experience feels entirely fresh in a deceptively familiar way. All aspects of the original title are present, including core mechanics such as witch time and animal transformations, as well as the previously unlockable skills such as air-dodge, now available right from the get-go. This means that the game can start expanding and refining on its original foundations right from the prologue, meaning crazy new skills and weapons for veteran players to enhance their experience with right out of the gate. New weapons include everything from a magic bow to a dual-pair of pink, spiky vine-whips (my personal favorites). Each weapon has unique animations depending on if you equip them to Bayonetta’s arms or feet, which results in thousands of different combo-pairing opportunities.

In terms of length, Bayonetta 2 clocks in at around fourteen hours, give or take. With tons of different difficulty levels and unlockables, though, there’s ample incentive to replay the entire adventure from start to finish (not to mention that the core gameplay is inherently fun on its own). There’s an online mode called tag climax, a competitive co-op experience where two players try to kill as many demons and angels as possible while competing for the high score. Stages for this mode are unlocked by completing single player chapters, so in a way both modes work together to give each other longevity. Tag climax matches range from five minutes to thirty minutes a piece, and while they’re not especially engaging (not to mention the online community is shitty), the inclusion of the mode serves as a reason to pick up the game every so often for quick bouts of inconsequential action.

Lastly, the soundtrack. Bayonetta 2 has turned one of the most slowly-paced Frank Sinatra songs, “Moon River”, into one of the most rip-roaring and fun pop songs in recent memory. Not to mention the main theme, “Tomorrow is Mine”, is absolutely fantastic in its own right. These two songs sung by the amazing Keeley Bumford, in accompaniment to a fantastic soundtrack including such classics as the “William Tell Overture” mean that pretty much anyone with a love of music will find something to jam out to.

One minor note is that graphical fidelity has been noticeably upgraded since the last time around. Not too much given the hardware limitations, but there is definitely a visible improvement since 2009’s Bayonetta.

With the only minor downside being some occasionally shoddy writing and acting, you are committing a sin against yourself if you love beat-’em-ups and ignore Bayonetta 2. Even I, one of the most casual button mashing gamers in recent memory, absolutely adored every moment I spent with the game and can see the unlimited potential it has to entertain hardcore fans. With one of the most engrossing action experiences of all time under its hood, a glorious female protagonist, a large assortment of content and a surprisingly accessible touchscreen mode (although most players, like myself, will prefer the traditional button scheme), this Wii U exclusive adventure might be the best game Nintendo releases all year (yes, I am considering Smash Bros. in that comment). In short, if there is one console exclusive worth supporting this year with your hard-earned cash, it’s Bayonetta 2.

And if somehow you’re still on the fence, remember that it even includes the original Bayonetta (complete with some snazzy Nintendo-themed gameplay-altering costumes), so you’re getting two of the best button mashers of the decade in one package.

I’ve had this game for, like, a year now.

Escape Plan is a puzzle platformer that uses touchscreen controls only. Initially, that sounds like a really scary premise: Precise puzzle movements that are controlled solely by twitchy fingertip recognitions. In reality, the final product is actually pretty great and does a good job utilizing its control scheme.

The motions you’ll play Escape Plan with are finger taps, swipes, swirls and rear touchpad bumps. It’s all utilized extremely well, and rarely do levels require awkward combinations of the previously mentioned movements. On the best of levels, you actually start to think touchscreen controls are a good thing in gaming. It’s a combination of the clever level design and quirky gimmicks that make the touchscreen gameplay work, as levels and gimmicks allow you enough processing time to figure out the puzzles and keep your fingers moving. I think that’s the key to touchscreen gaming, allowing you enough time to do your motions on-screen correctly, which Fun Bits Interactive (the developer) nails.

While gameplay alone is a big plus for Escape Plan, its real charm lies in its presentation and audio. The game chooses to diversify itself from other platformers by being completely black and white, like something out of a classic Mickey Mouse cartoon. Not only that, but every character hosts an inky, blobby physique, one that complements the two color color scheme perfectly. As simplistic as the visuals are, the graphics maintain cutting edge status for Vita standards, the lighting/shading effects being a perfect example of Escape Plan’s graphical capabilities. With that said, things still have an innocent factor to them that the game’s decidely classical soundtrack only helps to exemplify. Beethoven’s 5th playing as two black and white inky blobs scuttle and bumble their way through obstacles such as razor blades and giant hammers has a certain appeal that not many games have, being both perilous and humorous at the same time. 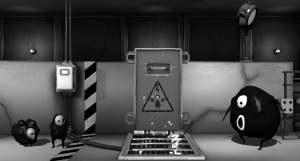 In conclusion, Escape Plan is both a poster child of intuitivity (new words ftw) and proper touchscreen controls, two things gaming as a medium is in desperate need of. Even if there’s only three to four hours worth of content in the actual package, Escape Plan’s unique allure alone is enough to justify the fifteen dollar price tag.